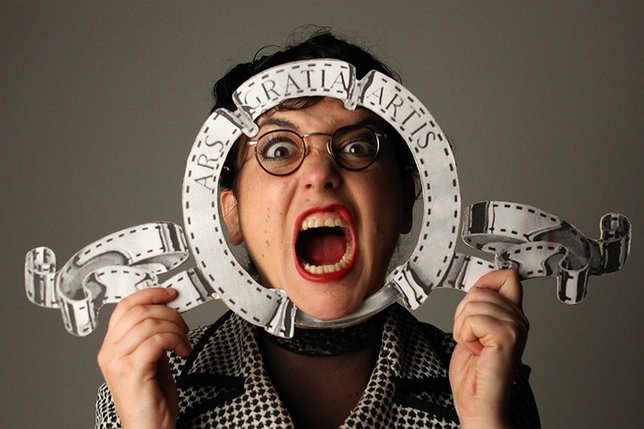 Sag Harbor, NY - February 14, 2019 - Bay Street Theater & Sag Harbor Center for the Arts together with Goat on a Boat will present an evening puppet theater event for adults ONLY with Yael Rasooley’s PAPER CUT on Friday, March 8 at 8 pm. This is the first time an adult puppet show has been presented at Bay Street Theater. Tickets are on sale through goatonaboat.org or by calling 631-725-4193. (Tickets are not for sale at the Box Office at Bay Street Theater.) The evening will be held in honor of International Women’s Day, and will include a wine reception following the performance, sponsored by Channing Daughters. This event is also supported by The Shed, a women's community workspace in Sag Harbor, NY.
Yael Rasooley’s Paper Cut,  is a one woman puppet show that she has toured world-wide. The story starts as a lonely secretary remains in the office after everyone else has gone home. From her little corner, using photos from old film magazines, she escapes into a work of daydreams. There she is a glamorous movie star from the 1940s and finds her ideal love at last. But as the story unravels, as imagination and reality collide, her romantic tale becomes a Hitchcock nightmare.
“Goat on a Boat is thrilled to present a puppet show for adults,” says Liz Joyce, Founder and Artistic Director for Goat on a Boat. “We are so lucky to have Yael Rasooley, such a talented international performer, share her award-winning show Paper Cut. Puppet shows aren't just for kids.”
“We are so pleased to be able to bring this new type of programming to Bay Street’s audience with Liz Joyce and Goat on a Boat. ” says Tracy Michell, Bay Street Theater Executive Director. “It’s also even more special to have it as part of International Women’s Day.”
The Goat on a Boat Puppet Theatre is a non-profit puppet theater committed to introducing young children and their families to a lifelong love of theater and the creative arts since 2001. It is among only 50 established puppet theaters listed by the Puppeteers of America, the only national organization of puppeteers. Through puppet shows and special events, Goat on a Boat invites families to be entertained and to become involved in their own cultural and creative education.
Bay Street Theater is a year-round, not-for-profit professional theater and community cultural center which endeavors to innovate, educate, and entertain a diverse community through the practice of the performing arts. We serve as a social and cultural gathering place, an educational resource, and a home for a community of artists.