A customer was robbed in the Walt Whitman Mall Apple Store. 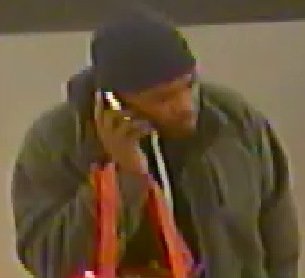 Huntington Station, NY - February 13, 2014 - Suffolk County Crime Stoppers and Suffolk County Police Second Squad detectives are seeking the public’s help to identify and locate the man who robbed someone in a store at the Walt Whitman Mall in Huntington Station last month.
A man was in the Apple Store, located at 160 Walt Whitman Road, when he felt an unknown man put his hand into the victim’s jacket pocket in an attempt to steal the victim’s wallet on January 13 at 4 p.m. The two struggled and the suspect gained control of the wallet that contained cash. The man fled the mall in a 2008 white Toyota Camry.
The man was described as black, in his 30s to 40s, 5 feet 10 inches tall to 6 feet tall and 170 pounds. He also had a goatee.
Suffolk County Crime Stoppers offers a cash reward of up to $5,000.00 for information that leads to an arrest. Anyone with information about this crime is asked to call anonymously to Crime Stoppers at 1-800-220-TIPS. All calls will be kept confidential.