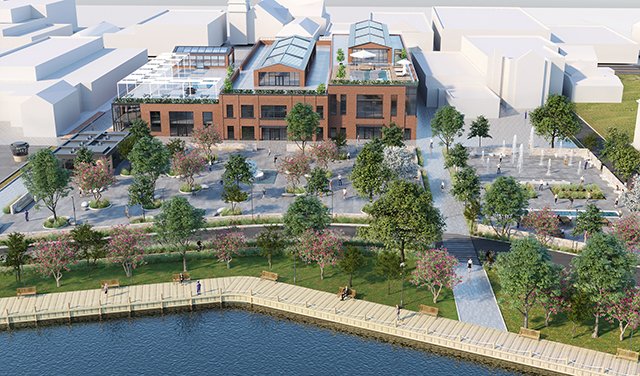 Riverhead officials hope that two recent grants will help them in their efforts to create a new town square that will provide a gathering space, pedestrian connectivity and open vistas from Main Street to the riverfront.

“The primary goal of this project is to reorient the pedestrian focus from the traditional Main Street to the Peconic Riverwalk,” a statement announcing the grants said.

The money will come in the form of two seperate grants from the Empire State Development, New York State’s chief economic development agency.

The Town of Riverhead was awarded $800,000 for its project that will be used to create public gathering spaces with performance areas, splash fountains, and permeable stone pathways interspersed with rain gardens that will also help capture occasional flooding near the Peconic River. The site will also feature interactive environmental learning stations.

According to Joe Maiorana who is the Assistant Community Development Project Supervisor for the town, the funds will go to purchase the first of three buildings needed to make the project happen.

A second $775,000 grant was awarded to the Long Island Science Center to expand into a building next to the proposed Riverhead Town Square. The statement said that the new center will include more than 6,000 sq. ft. of exhibition space, a new dedicated MakerSpace, and four classrooms.

According to Long Island Science Center (LISC) Executive Director Cailin Kaller, along with their current exhibits, the building will enable the center to add new offerings, including coding and robotics, a citizen science space, electric circuitry, a special space for preschool exploration, and a large exhibit area dedicated to science history on Long Island.

Riverhead Town Supervisor Yvette Aguiar was happy with the LISC's decision to stay in Riverhead.

“The Long Island Science Center could have elected to relocate elsewhere in the region,” said Aguiar. “However, they made a distinct decision to expand in the heart of Main Street, next to Riverhead Town Square.”