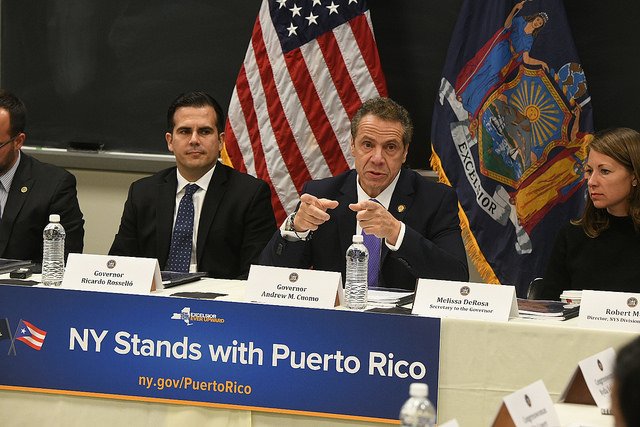 Albany, NY - December 12, 2017 - Governor Andrew M. Cuomo and Governor Ricardo Rosselló today announced a plan to rebuild and transform Puerto Rico's electric power system, which was severely damaged by Hurricane Maria in September. The envisioned system will be more resilient, efficient, advanced, and less dependent on fossil fuel imports that cost Puerto Ricans more than $2 billion annually.
"In the aftermath of Superstorm Sandy in New York, a plan was immediately put into place to harden and enhance the power grid to ensure storms would not damage our communities in the future - and now is the time to implement a similar plan to ensure these upgrades are also completed in Puerto Rico," Governor Cuomo said. "We need to act now to transform the island's power grid and provide the people of Puerto Rico with a modern and reliable electric system."
"As we continue to address the challenges of rebuilding Puerto Rico and restoring power to residents across the island, Governor Cuomo and the people of New York are stepping up yet again to provide unwavering support throughout this difficult recovery process," said Governor Rosselló. "I applaud the actions of the Puerto Rico Energy Resiliency Working Group for developing this plan and creating a critical foundation to rebuild and reimagine Puerto Rico's electric power system."
The plan, created by the Puerto Rico Energy Resiliency Working Group established by Governor Cuomo to aid the island in its damage assessment and power grid rebuild planning, calls for the island's new electric power system to be designed with the resiliency to withstand future storms and to be built with modern grid technologies and control systems. The new system will have increased renewable generation, such as wind and solar; incorporate new distributed energy resource technologies, such as energy storage and microgrids; reduce dependency on fossil fuels; and enable energy to become abundant, affordable and sustainable for the people of Puerto Rico.
The working group's rebuild recommendations are based on experience implementing power system recovery, rebuilding and hardening in the aftermath of hurricanes encountered on the U.S. mainland over the last decade. The recommendations include the use of modern technology and incorporate lessons learned from the successful rebuild efforts in other regions after natural disasters, such as Superstorm Sandy in New York. Additionally, the plan's recommendations align with the U.S. Department of Energy's recommendations for power system hardening and resiliency.
Consistent with the observed wind speeds from Hurricane Maria, Puerto Rico Electric Power Authority's new system needs to withstand a Category 4 storm, which produces wind speeds of 155 miles/hour and heavy floods. The plan also calls to modernize the Puerto Rico electric grid, leveraging proven power system technologies to better contain outages, reduce recovery times, lower operations costs and enable more sustainable energy resources.
The development of this plan was undertaken in parallel with New York State's post-hurricane assessment and restoration support to Puerto Rico that began in September. Currently, more than 450 New York State utilities workers are on the ground in Puerto Rico, working diligently to repair the island's power grid.
New York resources and personnel currently in Puerto Rico arrived in November following two previous deployments of New York Power Authority technical experts to Puerto Rico announced by Governor Cuomo on September 22 and September 29. In the immediate aftermath of Hurricane Maria, those NYPA electric utility crews embedded themselves within PREPA to assist in the triage of the power grid that included the assessment of virtually all of the island's 360 substations.
"After Superstorm Sandy, Governor Cuomo saw firsthand the real hardships of New Yorkers without electricity and heating for days and even weeks on end," Richard Kauffman, Chairman of Energy and Finance, New York State.  "The Governor immediately put into action a strategy to rebuild the grid of the past with the grid of the future under Reforming the Energy Vision, or REV, for a cleaner, more resilient and affordable energy system. I'm proud to be part of the plan to ensure Puerto Ricans will benefit from New York's experience and knowledge as we help the U.S. territory rebuild their grid."
"Governor Cuomo understood early on that it would be necessary to not only rebuild Puerto Rico's power grid to restore electric service for the people of Puerto Rico, but also to develop a plan for Puerto Rico's power grid of the future," Gil C. Quiniones, NYPA president and CEO, said. "NYPA, and our collaborators in the Governor's working group, want to seize this opportunity to transform and harden Puerto Rico's electric system to ensure that this catastrophic damage does not repeat itself."
The Puerto Rico Energy Resiliency Working Group, which put forth the plan with the assistance of Navigant Consulting, Inc., is comprised of power utilities and leading entities in the energy sector, including: