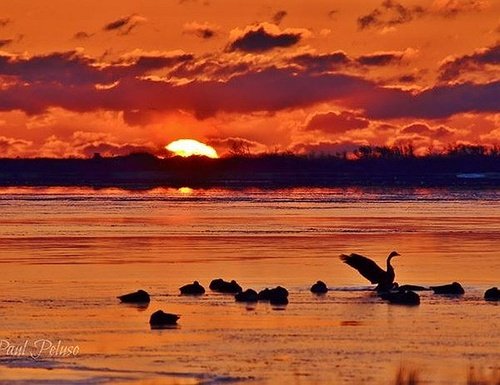 Brookhaven, NY - February 10, 2015 - Today, U.S. Senator Charles E. Schumer urged the Federal Aviation Administration (FAA) to expedite approval of the Town of Brookhaven’s application to construct a new wastewater treatment plant at Brookhaven Airport. The wastewater treatment plant is part of Suffolk’s proposed Mastic Shirley sewer project, and approval is sorely needed so that the 3 year long project can move forward as soon as possible. The sewer project is being funded through Community Development Block Grant (CDBG) money from the Sandy Relief Bill—which Schumer strongly advocated for— and includes construction of a new sewage treatment plant that will service 5,300 homes in the Mastic-Shirley area. The project would be the largest undertaking for a Long Island sewer project since the construction of the Southwest Sewer District in southwestern Suffolk County 35 years ago. The proposed location of the new wastewater treatment plant is at the Town of Brookhaven’s Calabro Airport, where adequate room exists to site a facility and the sub-surface leaching pools that would discharge the treated effluent to the groundwater. Because Brookhaven Airport accepts funding from the FAA, it is under certain federal obligations and requires FAA approval to transfer airport land. Town of Brookhaven has submitted an application to take control of the parcel of land needed to construct the treatment plant. Schumer said that quick approval by the FAA is needed for the sake of the thousands of Suffolk County residents in need of sewering, given that the plan will take three years to construct.

“Mastic-Shirley has waited far too long for its own sewer district, and we are moving towards making that dream a reality, but first the Town of Brookhaven and Suffolk County must get approval from the FAA to use this much-needed parcel of land at Brookhaven Airport for construction of a water treatment plant,” said Senator Schumer.

Schumer continued, “I worked hard last Congress to secure over $300 million in Sandy-relief funding to get the Mastic-Shirley sewer project off the ground, and this money needs to be spent ASAP in order to get this three year project moving, which will improve quality of life for residents, mitigate flood risk and reduce nitrogen levels in the ground and surface waters. I am urging the FAA to quickly approve Town of Brookhaven’s application to take control of this parcel of land so that the treatment plant needed for this sewer project can be built as soon as possible.”

Schumer is working closely with County Executive Steve Bellone on this critical project, and was joined by Town Supervisor Ed Romaine, Suffolk Legislator Browning and other local advocates.

"I have made it my administration’s top priority to protect the quality of Suffolk County's drinking, surface and ground water as I have worked vigorously with our leaders, including Senator Schumer, to invest in wastewater infrastructure and technology in order to protect our region’s future from nitrogen pollution and potential future storm damage,” said Suffolk County Executive Steve Bellone.  “The full implementation of the Mastic-Shirley sewer project is vital in restoring our coastal vegetation along the south shore which is essential to protecting these communities against future storms like Superstorm Sandy. We are grateful for the Senator’s efforts to expedite the transfer process in order for us to break ground on this much-needed wastewater treatment plant.

"Construction of this sewer district will improve our ground and surface waters and spur economic development in the area, creating hundreds of local jobs," said Brookhaven Supervisor Ed Romaine. "I want to thank Sen. Schumer for his leadership on this project and his efforts to expedite this much needed approval so that work on this treatment plant can begin."

"Suffolk County has made the creation of the Shirley/Mastic sewer district a top priority," stated Legislator Kate Browning. "Over the last six years I have led the effort to complete the maps and plans for the proposed project, and we are preparing to issue a request for proposals for the design of the district. This cannot happen until the FAA signs off on the necessary land transaction at Calabro Airport. I want to thank Senator Schumer for his assistance in making sure this happens as quickly as possible so that all strict funding deadlines are met."

During Superstorm Sandy, the storm surge surpassed the FEMA 100-year flood level mark in many Suffolk communities that lack sewer access.  The potential of extreme Sandy-type storm events and sea-level rise, combined with the degradation of protective tidal wetlands from Suffolk’s septic systems, poses a growing threat to these communities. According to Suffolk County, Sandy highlighted a long-neglected environmental problem in low-lying South Shore communities: rising nitrogen pollution fed from failing septic systems and cesspools.  As nitrogen has poured into Suffolk’s aquifer, bays and rivers, it has caused not only a water quality crisis, but eroded protective coastal wetlands to the point of failure during a storm.

The current cesspool and septic systems have caused tremendous damage to the Forge River's ecosystem, which runs through Mastic and empties in Moriches Bay. The Forge River was classifed as a damaged waterbody after a series of studies conducted by Stony Brook University and the Town of Brookhaven. A 2009 study by Stony Brook University's School of Marine and Atmospheric Sciences identified "an increase in sewage discharged into the river from cesspools and septic systems," as a contributing factor to the river's current condition. The study recommended sewering the community along the river.  It is estimated that the sewer project would reduce the current nitrogen load of 229 pounds per day to 69 pounds per day.

In May 2014, Schumer successfully urged then-Secretary of the Department of Housing & Urban Development (HUD) Shaun Donovan to provide over $300 million through HUD’s Community Development Block Grant (CDBG) funding from the Sandy Relief Bill to be used on critical sewer projects in Suffolk County, including the one for Mastic-Shirley. The Suffolk County Legislature also recently voted to approve $1 million to fund the final design for the creation of the sewer district along the western banks of the Forge River. The Mastic-Shirley project final design plans include construction of a new Advanced Water Treatment Facility (AWTF)  in the Mastic-Shirley area, near the Forge River, which will service 5,300 homes. The Brookhaven Calabro Airport has been selected as the best-suited site for the AWTF.

In a letter sent today to FAA Administrator Huerta, Schumer urged that the FAA quickly approve the Brookhaven Calabro Airport’s proposal to transfer land to Suffolk County, which will allow the county to construct the new wastewater treatment plant. Given the population density in the local area by the airport, Schumer noted that the most logical location for the much-needed Advanced Water Treatment Facility has been determined to be the southwest corner of Brookhaven Calabro Airport where adequate room exists to site a facility and the sub-surface leaching pools that would discharge the treated effluent to the groundwater. Schumer highlighted to Huerta that with this land transfer, the airport will maintain safety standards and clearance distances for current operations subject to FAA approval, and will make any necessary modifications to their Airport Layout Plan for FAA review.

The project will also have a direct economic impact to the Mastic-Shirley communities.  According to the 2010 U.S. Census, Shirley's poverty rate was at 9.1 percent and Mastic's was at 11.4 percent, while Suffolk County's average poverty rate as a whole was at 6.1 percent. Sewering both communities will allow them to attract new business and/or allow existing businesses to expand. Currently, the business districts in this area are limited by the capacity of their cesspools. An expansion of the Mastic Shirley business district would yield more jobs and increased tax revenue.