Though the Knicks did win last night, it has not been a terribly positive few days for New York sports. 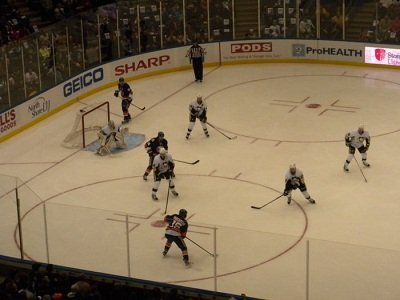 The Islanders and Rangers both suffered losses early in the weak.

Grabner scored New York’s first goal and was quickly followed by a shot from Boyes 35 seconds later to make the game interesting, but a fourth Penguins goal in the game’s last minutes would prove the end of the night. Nabokov blocked 22 of 25 as the Islanders lost 4-2.

The Rangers fared little better in their first match against New Jersey. The Devils scored in the fifth and nineteenth minutes of the game to go up 2-0—a score which held until nearly three minutes into the third, when they got past Lundqvist for the third time on 22 shots. Kreider provided the Rangers’ only goal a few minutes later as they lost 3-1.

With both teams coming off tough losses, neither wanted to falter in their first of four meetings this season. Evidently the Rangers were hungrier for the win, as they shot off to a 2-0 lead on goals from Miller and Gaborik during the first. After Tavares brought the game back within 1 on a goal midway through the second, Miller closed the period out by retrieving the Rangers’ two goal lead.

The third did not see a change in score until nearly the eighteenth minute when McDonagh padded the Rangers’ lead on an empty net shot. Nabokov blocked 21 of 24 for the Islanders while Lundqvist stopped 27 of 28 for the Rangers.

Having now lost three in a row, the Islanders stand at 4-5-1 this year while the Rangers improve to 5-5, but both teams trail the Devils and Penguins in the NHL’s Atlantic division.

The Islanders will play the Sabres tonight at 7, while the Rangers will meet the Lightning tomorrow night at 7:30.

The Knicks’ 5 game winning streak came to an end this week. Though they trailed Washington by 3 entering the half, they were up 73-70 before the fourth quarter began. Unfortunately, the Wizards (who are now 14-35) had their strongest final period of the year as they powered past New York to come out on top, 106-96.

Carmelo Anthony had 31 points while Felton scored 17; Stoudemire and Smith had 19 and 13 off the bench respectively.

Yesterday’s game against the Timberwolves did not look much prettier. Despite playing against another team with a losing record, the Knicks had a multitude of lead changes in Minnesota.

After being outscored 31-18 in the third, New York turned the tables with a 30-18 fourth period. Anthony scored 12 points in the final seven minutes to put the Knicks over 100-94. He had 36 points on the night, while JR Smith put up 15. Stoudemire, Felton, and Novak all had 11.

The Knicks will play the Clippers tomorrow at 1 PM.

Despite the Lakers being without Dwight Howard, they were able to pull off a 9 point victory over Brooklyn.

Brook Lopez had an impressive 30 points and 11 rebounds, but Williams and Johnson were the only other Nets to break into double digits.

The Nets moved on to Detroit—where they have lost their last 10 games—in hopes of recovering from the loss. They trailed 46-40 at half time, but turned things around in the second half. Brooklyn cut the lead by 2 in the third quarter, then erased it with a 24-17 fourth that put them over 93-90.

Though no Nets player scored more than 17 points, each member of the starting 5 had at least 10, with Evans grabbing 14 rebounds as well.

Brooklyn next moved on to the Wizards, who seem to be developing a habit of making life difficult for New York basketball teams this season. Washington devastated the Nets with a 30-11 second quarter, which Brooklyn chipped away at after the break, but could not overcome. The Wizards won 89-74 after keeping the Nets at bay.

Williams led the team in its loss with 20 points, followed by Johnson with 14 and Lopez with 13.