“Even world leaders recognize the world-class cultural attractions Huntington has to offer and I hope the U.N. Secretary–General enjoyed his visit!” - Lupinacci 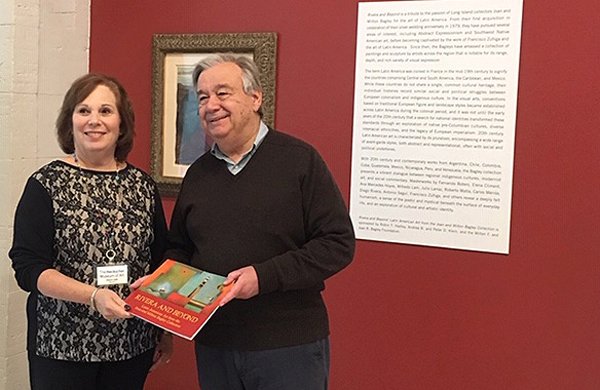 Huntington, NY - February 7, 2019 - Supervisor Chad A. Lupinacci touted Huntington as a world-class cultural attraction after United Nations Secretary─General António Guterres’ recent visit to the The Heckscher Museum of Art.
“Huntington offers a wide array of exceptional cultural offerings, from our parks and recreational attractions to the magnificent collections on exhibit at the Heckscher Museum of Art,” said Supervisor Chad A. Lupinacci. “Even world leaders recognize the world-class cultural attractions Huntington has to offer and I hope the U.N. Secretary–General enjoyed his visit!”
“It was gratifying to have Secretary-General Guterres visit The Heckscher for the Rivera and Beyond exhibition,” noted Michael W. Schantz, Director of the Museum. “The exhibition includes masterworks of many internationally-acclaimed artists, and we are pleased that someone as knowledgeable and well-travelled as Mr. Guterres was drawn to the Museum and this extraordinary exhibition. It is a must-see show.”
United Nations Secretary─General António Guterres visited The Heckscher Museum of Art recently to tour the exhibition Rivera and Beyond: Latin American Art from the Joan and Milton Bagley Collection. Heckscher Docent Elinor Jaffe escorted the Secretary–General through the exhibition. Guterres took office as Secretary–General of the U.N. in January of 2017. A native of Lisbon, Portugal, he was Prime Minister of Portugal from 1995 to 2002.