Village of Hempstead Mayor Wayne J. Hall Sr. today announced the success of his signature initiative to facilitate the empowerment of Hempstead residents. 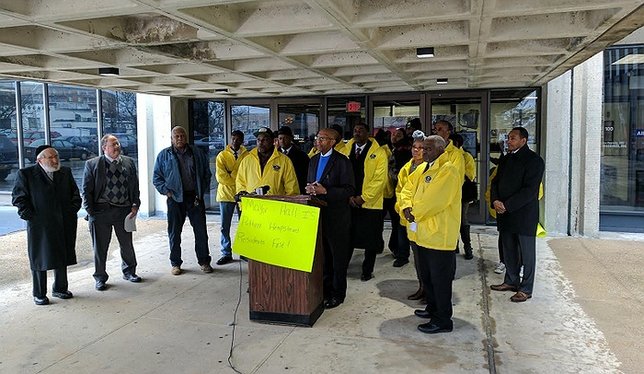 Photo by: Village of Hempstead.

Hempstead, NY - February 7, 2017 - Village of Hempstead Mayor Wayne J. Hall Sr. today announced the success of his signature initiative to facilitate the empowerment of Hempstead residents. Dozens of members of the community and Mayor Hall came together at 50 Clinton Street, the site of a new Rivoli development emblematic of the Mayor’s vision for Hempstead, to celebrate the creation of jobs and opportunity in the Village.

“Job creation has always been one of Mayor Hall’s top priorities, and we’ve been fortunate to work with his administration to further the betterment of the Hempstead community,” said Executive Director of the ABBA Leadership Center Reverend Reginald Benjamin. “By putting Hempstead’s able-bodied population to work we clean up the streets.”

In partnership with the ABBA Leadership Center, which provides Occupational Safety and Health Administration (OSHA) training for Village residents, the developer employed more than 20 of its construction workers from the Village and prioritized awarding contracts to local businesses. In addition, Rivoli renovated and improved an existing building in the Village, acting on Mayor Hall’s commitment to preserving the historical character and charm of the Village.

“Thanks to Mayor Hall’s advocacy on my behalf I was employed at 50 Clinton Street, and was able to bring home not only a paycheck but pride in my work,” said Dexter Harris. “Through his work in the Village, Mayor Hall gave me a second chance.”

“By requiring developers put Hempstead residents first, Mayor Hall helped me find a job,” said John Gray, a Navy veteran who has obtained work through Mayor Hall’s Hempstead First initiatives. “As a result, I am currently employed at 50 Clinton Street as a security guard.”

“I have been able to do extensive work coordinating projects with local hiring through initiatives launched by Mayor Hall and the ABBA Leadership Institute,” said Derrick Armstrong, a local contractor. “Through Mayor Hall’s programs I have been privileged to hire hundreds of local Village residents and launch training programs to help interested community residents enter skilled trade employment.”

This development represents the kind of dedication to the Hempstead community for which Mayor Hall has fiercely advocated throughout his tenure, and which he demands from any developer seeking to build in the Village. Mayor Hall’s requirements for developers include prioritizing local residents and contractors so they have the opportunity to apply for jobs first. The success of this project sets a precedent in the Village of Hempstead, placing Hempstead first and signaling a new era of jobs and prosperity for residents seeking success.

“Facilitating a pathway to success for every resident in Hempstead has always been one of my top priorities,” said Mayor Wayne J. Hall Sr. “Employment in the Village creates the opportunity to grow and thrive, which is why any developer seeking government assistance to build in the Village must also contribute to the community by providing a ladder of upward mobility for residents.”