Sen. Kenneth P. LaValle Tuesday announced that the "Public Assistance Integrity Act" will again come before the Senate for a vote next week. 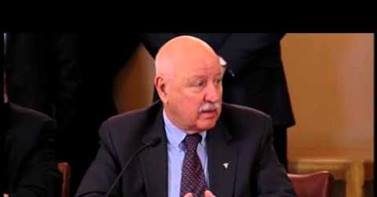 Sen. Kenneth P. LaValle Tuesday announced that the “Public Assistance Integrity Act” (Senate Bill S966) will again come before the Senate for a vote next week.  The Act, sponsored by LaValle, prohibits welfare recipients from using cash assistance to purchase tobacco, alcoholic beverages and lottery tickets. The act also prohibits the withdrawal of public assistance at casinos and adult-oriented establishments.

“New York State stands to lose $120 Million on welfare funding from the federal government if we don’t act to curtail spending on these types of activities,” LaValle said.

“This legislation will ensure that monies are available for those that truly need it, while taking those who misuse government funds off the program,” he continued.

Currently, there are no laws to prevent unscrupulous welfare recipients from utilizing Electronic Benefits Transfer cards (EBT cards) to pay for items that taxpayer monies were never intended for.

EBT cards work like debit cards for welfare recipients. They contain both food stamps, which are strictly regulated, and cash assistance, which, under current law, is not. The cash assistance is intended for items that cannot be purchased utilizing food stamps, such as soap, toothpaste and school supplies. But the money can also be used to buy cigarettes, beer and lottery tickets—and even to fund a day at the racetrack or an evening at a local strip club.

If signed into law, the act would limit where EBT cards can be used and what they can be used for, providing for greater accountability. The penalties under the measure would result in the individuals being removed from the welfare programs after a 3-strikes-you’re-out penalty phase.

Public assistance is designed to offer temporary assistance to needy families until they can transition back to the workforce and become self-sufficient. The new law would ensure that those in need would continue to receive the funds they require to responsibly care for their families, while protecting hardworking taxpayers from wasteful, outrageous and costly abuses.

The Senate passed the legislation during last year’s session in June, but the Assembly failed to act.

“I expect that we in the Senate will again pass the bill to prohibit this misuse of taxpayer dollars.  It’s my hope that the Assembly and the Governor follow suit and make this Act Law,” LaValle said.

Include your comments below!