Get Ready for Groundhog's Day!

Set your alarm clock early on Saturday! It is Groundhog Day. 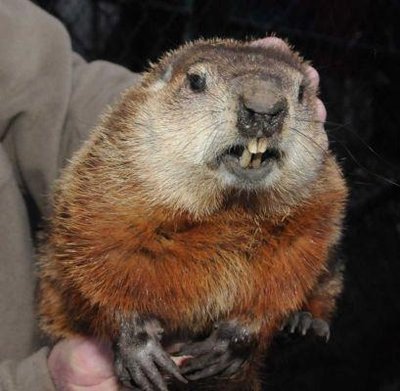 Long Island is lucky enough to have Malverne Mel and Holtsville Hal.  Will we have six more weeks of winter or an early spring?  Groundhog Day has its origins in an ancient celebration of a point mid-way between the Winter Solstice and the Spring Equinox. Superstition says if they see their shadows when they emerge from their hutches, we could have six more weeks of winter.

The Long Island groundhogs have been at odds for some years now.  Last year Holtsville Hal predicted an early spring, while Malverne Mel saw his shadow meaning six more weeks of winter.

Malverne's festivities start at 7 a.m. at the Malverne Long Island Rail Road Station on Hempstead Avenue.  Mel will make his prediction to the music of the Banjo Rascals surrounded by Village officials in top hats as Mayor McDonald coaxes Mel to leave his cozy hutch and offer his weather forecast. Join your favorite team: "Team Early Spring" or "Team Six More Weeks of Winter." There will be lots of activity for children and adults including a live wood-carving demonstration, a poster contest, a petting zoo, a scavenger hunt and, a photo opportunity with Mel himself. The afternoon events include story time at the Malverne Library followed by a showing of the movie, "Groundhog Day." Be sure to bring your camera as rumor has it, a costumed groundhog mascot will be available to pose for pictures. For more information call Village Hall at (516) 599-1200, ext. 106

The Town of Brookhaven Wildlife & Ecology Center is located at 249 Buckley Road.  Holtsville Hal will make his prediction at 7:25 AM. rain or shine.  The animal preserve and building will be opened from 6:30 a.m. until 11 a.m.  Refreshments will be served.  For more information call (631) 758-9664.

The Bill Murray comedy entitled “Groundhog Day,” was released 20 years ago.  In the film, a weatherman covering the event must relive the day over and over again.

We'd love to see your pictures of the local celebrations in the Photo Gallery.