Joseph Romano of Levittown was convicted Friday for conspiring to kill the federal judge and prosecutor who convicted him for a multi-million-dollar fraud scheme. 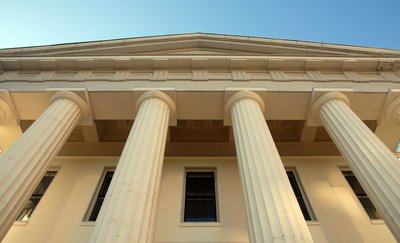 A Levittown resident was convicted by a federal jury on Friday after he attempted to hire a hitman to kill the judge and federal prosecutor that put him in jail.

Joseph Romano, 51, was originally convicted by the judge and prosecutor for engaging in an eight-year, multi-million-dollar fraud involving the telemarketing of coins, according to the Federal Bureau of Investigation.  While Romano was held in the Nassau County Correctional Center, he told another inmate of his plans to murder those who convicted him, and the inmate reported this threat to the police.

“A threat against a member of the criminal justice system, such as a Judge or an attorney, is nothing less than an attempt to subvert the system, and as such will not be tolerated,” said U.S. Attorney William J. Hochul, Jr. in an FBI press release.

Anticipating his plot, two undercover police officers posed as hitmen, and Romano agreed to pay $40,000 for them to kill the judge and prosecutor. He also that the hitmen cut off the judge an prosecutor’s heads in exchange for a “bonus.”

The undercover officers continued to meet with Romano and his co-conspirator, Dejvid Mirkovic, on multiple occasions.  At the first meeting, Romano offered to pay one of the officers $3,000 to assault an individual with whom Romano had a financial dispute. Mirkovic gave the officer $1,500 as a down payment for the assault.  The officers returned with staged photographs of the assaulted individual to show the men that the individual was indeed attacked, and Mirkovic paid them another $1,500.

That same day, the men gave one of the undercover officers the directions to carry out the two murders for $40,000, and to behead both the judge and prosecutor and mutilate the body of the prosecutor for an extra sum of money.  The officer received $22,000 in down payments in the following weeks, and was promised the other $18,000 after the murders were carried out.

Law enforcement officers arrested Romano and Mirkovic on October 9, 2012, and recovered $18,000 in cash and a loaded 9mm semi-automatic handgun at Mirkovic’s home in Florida.

Mirkovic pleaded guilty to conspiracy to murder back in March 2013, and was sentenced to 24 years in prison in August 2013.