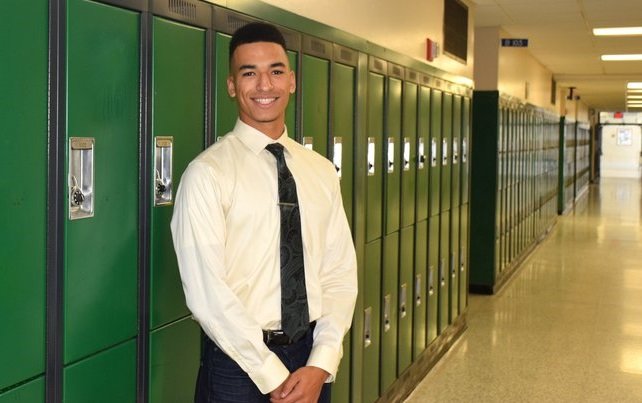 Mastic Beach, NY - January 18, 2017 - Ezekiel Torres, a senior at William Floyd High School, recently received one of Congressman Lee Zeldin’s nominations to the U.S. Naval Academy in Annapolis, MD, one of the nation’s five military service academies which prepares young men and women to become professional officers of competence, character and compassion. If selected by the Academy, Ezekiel will attend for four years as a midshipman in the U.S. Navy, and then graduate with a Bachelor of Science degree before receiving a commission in the Navy as an ensign or a second lieutenant in the U.S. Marine Corps.

Torres, 17, of Shirley, has a long history of family members who have served in the nation’s military, which has helped shape his goal of garnering acceptance to Annapolis. He is no stranger to the Academy, as he was accepted to and attended the U.S. Naval Academy Summer Seminar last June, in which he participated in a fast-paced six-day experience focused on academics, athletics and professional training all designed to help prepare the nation’s future leaders.

Nominations to a U.S. Service Academy are based on the “whole person” evaluation including such factors as academic achievement, leadership skills, extra-curricular activities, physical aptitude, character and motivation, which are all taken into consideration and compared with other applicants. “I am proud to nominate Ezekiel Torres as one of my United States Naval Academy nominees for New York’s First Congressional District,” said Congressman Zeldin. “Ezekiel has shown his commitment to the values important to our armed forces – hard work, dedication and a willingness to serve our nation. Congratulations to Ezekiel and his family. I wish him the best of luck in all future endeavors.”

“I’m thankful to Congressman Zeldin and his review board for evaluating and nominating me for this honor,” said Torres, who described the interview process as in-depth and one that covered a broad range of topics such as character and morality, academics, extra-curricular activities, the biggest issues currently facing America and much more. “This is just another step toward my ultimate goal of attending the Academy,” he said.

Torres has made the most of his time in the William Floyd School District – attending from kindergarten through 12th grade at William Floyd Elementary School, William Floyd Middle School and now William Floyd High School – by excelling in his academics and participating in a plethora of extra-curricular activities.

Some of those activities include serving as a member of the National Honor Society, playing the tenor saxophone in the high school wind symphony (since fourth grade) and being a three-year member of the Tri-M Music Honor Society. He also is a member of the Youth & Government Club and was elected to the position of Attorney General and received the “Best Attorney” and “Best Brief” awards. He also participates in mock trial and was an integral part of the state championship team during his freshman year. He played outside linebacker for the Suffolk County champion varsity football team, earning First-Team All-Division honors.

He also received accolades twice from the Town of Brookhaven for maintaining a grade point average well above 3.7 for their annual Hispanic Heritage Month celebration. Ezekiel also volunteers at a local food pantry and has spent many Saturday afternoons helping to mentor and coach youth football players in the community.

If he is selected for the Academy, he plans on studying political science and eventually pursuing a career as an attorney and/or in public service (government). If he is not selected for the Academy, he will focus his studies on public policy or industrial labor relations and has applied to Princeton, Cornell, Duke, SUNY Albany and SUNY Binghamton.