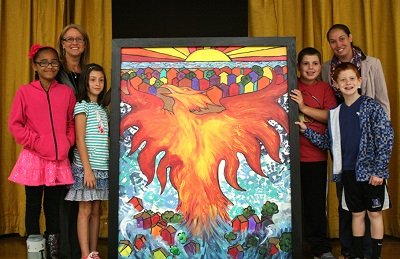 Mastic Beach, NY - September 30, 2013 – With the one-year anniversary of Superstorm Sandy approaching, students at Tangier Smith Elementary School in the William Floyd School District received a special gift from sixth-grade students at Juniata Gap Elementary School in Altoona, Pennsylvania – a four by five foot painting of a Phoenix emerging from a neighborhood, which represents Mastic Beach, an area hard hit by the storm. In Greek mythology, a Phoenix symbolizes regeneration and new life.

“The Phoenix,” delivered by Pamela Snyder Etters, the Executive Director of the Altoona Symphony Orchestra and a visiting artist at Juniata Gap Elementary School, illustrates a symbol of hope for Tangier Smith students affected by the storm and how they are rising above the circumstances.

The gift had special significance to the children of Tangier Smith, as many of them were affected by the devastation of the storm. “They were deeply moved by the painting,” said Toni Komorowski, Principal, Tangier Smith Elementary School. “They were also moved by the thought of how others 350 miles away cared so much about them.”

As a show of appreciation and to forever connect the two schools, the students created a painting of their own to return to Juniata Gap Elementary School – a tree with leaves made with the imprints of hands of each fifth-grade student. The painting also showed children coming out of two buildings – signifying both schools – holding hands and touching the tree.

“Our painting was a representation of how Tangier Smith and Juniata Gap elementary schools will be forever connected,” said Mrs. Komorowski. The painting will be placed in a prominent location inside Tangier Smith Elementary School.