Over the past eight days, Governor Andrew M. Cuomo has unveiled 14 signature proposals from this year's agenda in the lead up to his 2016 State of the State address. 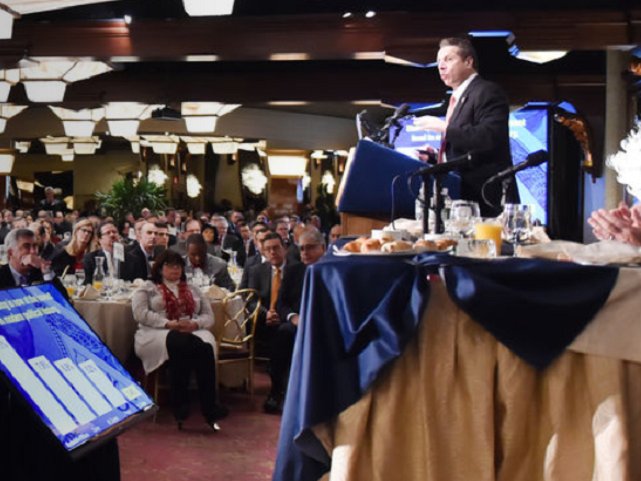 14 signature proposals rolled out over past 8 days, highlighting key parts of Governor’s sweeping agenda to build on 5 years of progress and continue moving New York State forward. Governor to deliver full State of State address tomorrow at 12:30 p.m. in Albany.

Albany, NY - January 12, 2016 - Over the past eight days, Governor Andrew M. Cuomo has unveiled 14 signature proposals from this year's agenda in the lead up to his 2016 State of the State address.

The Governor's 2016 agenda – including the proposals detailed below – will stimulate the economy and ensure opportunity for all New Yorkers, strengthen the state’s vital infrastructure and rebuild it to meet the needs of the future, and continue New York’s legacy as a national leader in furthering causes of equality, justice and social progress.

The Governor will deliver his full State of the State address tomorrow at 12:30 p.m. in Albany and be streamed live online.

The signature proposals announced so far include:

PROPOSAL 1: Restore economic justice by making New York the first state in the nation to enact a $15 minimum wage for all workers. While highlighting this proposal, the Governor announced that the State University of New York will raise the minimum wage for more than 28,000 employees.

PROPOSAL 2: Launch a comprehensive plan to transform and expand vital infrastructure downstate and make critical investments in the region. Most notably, the proposal includes a major expansion and improvement project for the Long Island Rail Road between Floral Park and Hicksville.

The project will allow the LIRR to increase service, reduce congestion and train delays caused whenever there is an incident along this busy stretch of tracks and will enable the LIRR to run "reverse-peak" trains to allow people to take the LIRR to jobs on Long Island during traditional business hours. By allowing the LIRR to increase service between Floral Park and Hicksville, it will provide a more attractive alternative to driving and thereby reduce traffic on Long Island's major east-west highways, like the L.I.E., Northern State and Southern State, and more trains will make it easier for Long Islanders to reach LaGuardia and Kennedy airports by train.

PROPOSAL 3: Bolster New York's legacy of environmental protection. The Governor has proposed allocating $300 million for the State’s Environmental Protection Fund – the highest amount ever for the fund and more than double the fund’s level when the Governor first took office. The Governor also announced two major investments in water infrastructure in Suffolk and Nassau Counties.

PROPOSAL 4: Make a series of investments and new initiatives to continue growing the economy and building stronger, more vibrant communities across New York State. These proposals include significant tax relief for small businesses, increased funding to support municipal water infrastructure improvement projects, a new effort to revitalize and transform downtown areas in each region of the state, and a sixth round of the successful Regional Economic Development Council initiative.

PROPOSAL 5: Invest in Upstate transportation infrastructure. This includes a plan to offer a tax credit that cuts tolls in half for the New York residents and businesses who utilize the Thruway most often – benefitting nearly one million passenger, business and farm vehicles using E-Z Passes; eliminating tolls for agricultural vehicles; and keeping tolls flat until at least 2020 for all other drivers.

PROPOSAL 6: Transform Penn Station and the historic James A. Farley Post Office into a world-class transportation hub. The project, known as the Empire Station Complex, will feature significant passenger improvements, including first-class amenities, natural light, increased train capacity and decreased congestion, and improved signage to dramatically enhance the travel experience. The project – which is anticipated to cost $3 billion – will be expedited by a public-private partnership in order to break ground this year and complete substantial construction within the next three years.

PROPOSAL 7: Dramatically expand and improve the Jacob K. Javits Convention Center to stimulate the regional economy. The proposal will expand the Javits Center by 1.2 million square feet, resulting in a fivefold increase in meeting and ballroom space, including the largest ballroom in the Northeast. A four-level, 480,000 square foot truck garage capable of housing hundreds of tractor-trailers at one time will also be constructed to improve pedestrian safety and local traffic flow.

PROPOSAL 8: Modernize and fundamentally transform the Metropolitan Transportation Authority, dramatically improving the travel experience for millions of New Yorkers and visitors to the metropolitan region. This proposal includes a new approach to rapidly redesign and renew 30 existing subway stations across the system. It also includes a number of technology initiatives to bring the system into the 21st century, including expanding Wi-Fi hotspots, accelerating mobile payments and ticketing to replace the MetroCard, and providing USB ports on subway trains, buses and in stations to allow customers to charge their mobile devices.

PROPOSAL 10: Dramatically expand and improve access to high-speed Internet in communities statewide. Lieutenant Governor Kathy Hochul detailed this proposal shortly after the New York State Public Service Commission voted to approve the merger of Time Warner Cable and Charter Communications, which will dramatically improve broadband availability for millions of New Yorkers and lead to more than $1 billion in direct investments and consumer benefits.

Additionally, the state issued a $500 million solicitation for private sector partners to join the New NY Broadband Program, which will greatly expand Internet access in all regions of the state, with a focus on unserved and underserved areas.

PROPOSAL 11: Launch a $200 million competition to revitalize Upstate airports. The proposal is designed to enhance airports throughout Upstate New York, and promote new opportunities for regional economic development and partnership between the public and private sectors.

The Governor made this announcement as he also kicked off the start of renovations that will transform the New York State Fairgrounds site into a premier, multi-use facility. The Governor marked the official start of the historic renovation project with the implosion of the grandstand today.

PROPOSAL 12: Combat poverty and reduce rampant inequality through the Empire State Poverty Reduction Initiative. The $25 million program will bring together state and local government, non-profit and business groups to design and implement coordinated solutions to increase social mobility in ten cities with the highest poverty rates in the state.

PROPOSAL 13: Launch a "Right Priorities" initiative to further New York’s status as a national leader in criminal justice and re-entry reforms. The Governor's proposal will help at-risk youth find positive opportunities in their communities, while also providing citizens who enter the criminal justice system the opportunity to rehabilitate, return home, and contribute to their communities.

In 2014, Governor Cuomo established a goal of 30 percent for New York’s MWBE state contract utilization – the highest goal of any state in the nation. However, under state law, that goal only applies to contracts issued by state agencies and authorities; it does not apply to state funding given to localities such as cities, counties, towns, villages and school districts, which amounts to approximately $65 billion annually. This year, the Governor will advance legislation addressing this disconnect by expanding the MWBE goal setting to localities and entities that subcontract with those localities. Doing so will leverage the largest pool of state funding in history to combat systemic discrimination and create new opportunities for MWBE participation.