Governor Cuomo today unveiled the fourth signature proposal of his 2016 agenda: a series of investments and initiatives designed to continue growing the economy and building stronger, more vibrant communities across New York State. 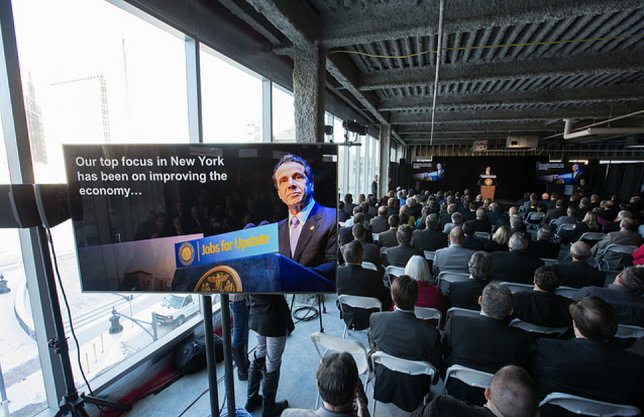 Albany, NY - January 5, 2015 - Governor Cuomo today unveiled the fourth signature proposal of his 2016 agenda: a series of investments and initiatives designed to continue growing the economy and building stronger, more vibrant communities across New York State. These proposals include significant tax relief for small businesses, increased funding to support municipal water infrastructure improvement projects, a new effort to revitalize and transform downtown areas in each region of the state, and a sixth round of the successful Regional Economic Development Council initiative. The Governor discussed these announcements – which are a preview of signature policies from his upcoming 2016 agenda – during an event today in Rochester.

“Over the past five years, we have redeveloped New York’s economy and restored opportunity in communities across Upstate – and now we are building on that momentum to make a difference that will last for generations,” said Governor Cuomo. “We are going to make critical investments in infrastructure, cut taxes for small businesses, and invest in the regional approach to economic development that has made a difference across Upstate. Together we are going to continue moving this state forward.”

To continue growth of the small business sector and help further the expansion of New York’s economy, taxes are being lowered both for small businesses who pay via the corporate tax and those paying through the personal income tax.

“We are going to make critical investments in infrastructure, cut taxes for small businesses...Together we are going to continue moving this state forward,” said Governor Cuomo.

Roughly 1,091,000 small businesses statewide will benefit from the Governor’s 2016 proposals. A regional breakdown of benefitting businesses is available below:

Governor Cuomo’s Executive Budget includes $250 million in funding to support drinking water and wastewater infrastructure projects across the state, with half distributed to municipalities this year and the remaining half in 2017. Allocations will be administered by the Environmental Facilities Corporation, and the Departments of Health and Environmental Conservation.

This proposal increases by $100 million the Water Infrastructure Improvement Act of 2015, which was approved during the 2015-16 state budget to support grants over three state fiscal years. Last year, Governor Cuomo announced that $50 million of funding was awarded to 45 projects across the state, leveraging more than $440 million in water infrastructure investments. In total, this $300 million investment will leverage more than $1.5 billion in local investment in water infrastructure improvements across the state.

The Governor’s $100 million Downtown Revitalization Initiative (the “DRI”) is a comprehensive and coordinated multi-agency approach to transform long-forgotten areas into dynamic neighborhoods where tomorrow’s workforce will want to live, work, and raise a family.

The state has had success with a concentrated investment approach to community revitalization such as the State’s $2 million investment in Corning to revitalize the Gaffer District and other areas. Corning used these funds to leverage an additional $8 million in private investment to rehabilitate underutilized historic buildings to house new and growing small businesses that anchor the area.

The initiative will invest $100 million in 10 communities for transformative housing, economic development, transportation and community projects that will attract and retain residents, visitors and businesses. Projects will be identified through a strategic planning process driven by third party planning experts in consultation with planners from the Department of State and Housing and Community Renewal.

The state will work with each Regional Economic Development Council to select one community that is currently experiencing population loss and/or economic decline that will submit revitalization plans, developed in collaboration with policy and planning experts, for their downtown area. Selections will be due in April, and the identified communities will be assigned State agency resource teams comprised of community planners from Department of State and Housing and Community Renewal, as well as independent planning experts to assist in the creation of a strategic investment plan that will be submitted as part of the 2016 REDC process. Each community revitalization plan will identify a series of coordinated projects that will drive economic activity and population growth in the downtown area.

Eligible projects will include those that grow small businesses and employment, expand housing, improve transportation corridors, and leverage anchor institutions such as universities and hospitals. The 2016 REDC process will also provide priority funding in the Consolidated Funding Application for downtown revitalization projects in other communities that have these same goals.

DRI funds will also be leveraged with private investment and existing State resources, including:

In 2011, Governor Cuomo created the Regional Economic Development Council competition to develop regional economic development plans through a bottom-up approach that brought higher education, industry, and government leaders together. This new strategy has generated nearly $4 billion of state investment that has leveraged $22 billion in private investment, funded more than 4,100 projects and created more than 200,000 new jobs across the state.

In 2015, the Governor created the $1.5 billion Upstate Revitalization Initiative to replicate the success of the Buffalo Billion and continue driving economic growth across other parts of Upstate New York. Through the URI, the Finger Lakes, Southern Tier and Central New York regions secured awards of $500 each over the next five years to support projects and strategies that create jobs and both strengthen and diversity their economies.

To build on the success of the REDC and URI programs, the Governor proposes continuing this regional economic development approach with $950 million in the 2016-17 state budget to support a sixth round of the REDC awards and URI runners-up awards. Round VI of the REDC initiative will include $750 million to be split competitively among each of the state’s ten regions, and $200 million to fund top projects for the runners up from last year’s URI.