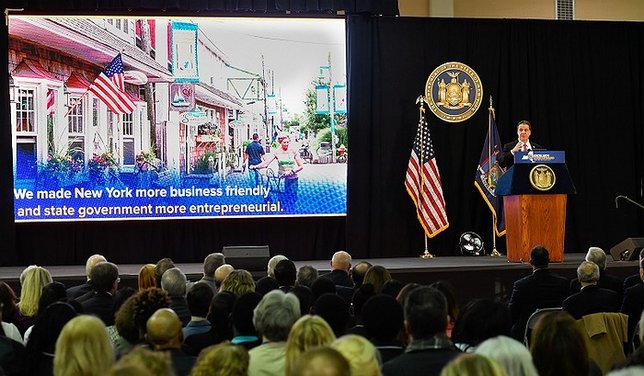 2017 State of the State Address on Long Island: Offshore wind master plan to be completed by end of 2017.

Farmingdale, NY - January 10, 2017 - Governor Andrew M. Cuomo today called on the Long Island Power Authority to approve a 90 megawatt offshore wind project 30 miles southeast of Montauk. The project will be the nation's largest offshore wind farm and will not be visible from Long Island's beaches. He also proposed an unprecedented commitment to develop up to 2.4 gigawatts of offshore wind power by 2030, enough power generation for 1.25 million homes and the largest commitment in U.S. history. The projects will be developed out of view from the coast and in close collaboration with local communities and stakeholders. The Offshore Wind Master Plan will outline the path forward for this unprecedented commitment to offshore wind and will be completed by the end of 2017.

"New York's unparalleled commitment to offshore wind power will create new, high-paying jobs, reduce our carbon footprint, establish a new, reliable source of energy for millions of New Yorkers, and solidify New York's status as a national clean energy leader," Governor Cuomo said. "The Offshore Wind Master Plan will establish a bold strategy to harness this untapped resource in New York and provide a new source of energy to power a brighter, greener future for all."

Offshore wind is critical to meeting the goal outlined in the Governor's Clean Energy Standard to meet 50 percent of New York's electricity needs with renewable sources by 2030. As part of this proposal, the Governor also calls on state agencies to ensure a 79,000 acre lease area capable of siting approximately 800 megawatts of offshore wind off of the Rockaway Peninsula is developed cost-effectively and responsibly to customers.

In addition, Governor Cuomo directs the Department of Environmental Conservation and the New York State Energy Research and Development Authority to undertake a comprehensive study to determine the most rapid, cost-effective, and responsible pathway to reach 100 percent renewable energy statewide. The State will engage academic partners to draw upon existing clean energy research and seek input from other key stakeholders.

Long Island Projects
Governor Cuomo called on the Long Island Power Authority to approve the nation's largest offshore wind farm. The project, a 90 megawatt development 30 miles southeast of Montauk, is the first step toward developing an area that can host up to 1,000 megawatts of offshore wind power. In an indication of offshore wind's growing attractiveness as a power source, the proposed project is the most innovative and least cost way to meet the growing power needs of the South Fork and to provide cleaner energy for Long Island. The Long Island Power Authority has indicated that contract negotiations are close to final, and the project will be voted on at its January meeting. The Governor called on LIPA to vote to approve the project and ensure it is developed responsibly and cost-effectively for all stakeholders.

A second project will provide approximately 800 megawatts of offshore wind power in an area 17 miles south of the Rockaway Peninsula. In December, the international energy company Statoil Wind US LLC won an auction from the federal government to lease the area for wind energy development.

The Governor is calling on the New York State Energy Research and Development Authority to work with Statoil to ensure the project delivers power cost-effectively and responsibly to customers. NYSERDA will also help ensure the needs of affected stakeholders like fishermen, maritime industries, coastal communities, and labor are met. The company won the lease for $42.5 million, demonstrating the powerful commercial interest in developing offshore wind for New York State.

Offshore Wind Master Plan
With some of the most favorable conditions for offshore wind in the United States, the coast of Long Island has the potential to bring an enormous amount of renewable energy, and substantial job creation and economic development benefits to all New Yorkers. To reap these benefits, Governor Cuomo calls for the cost-effective and environmentally responsible development of up to 2.4 gigawatts of offshore wind power in the Atlantic Ocean by 2030 outside of the viewshed of the Long Island coast and in close collaboration with communities and stakeholders.

This commitment will be advanced through the state’s Offshore Wind Master Plan which will be completed by the end of 2017. The plan will establish a commitment for the responsible development of New York's offshore wind resources in ways that benefit electricity customers and protect the environment. Offshore wind will protect the environment by reducing emissions and spur new investments in infrastructure and manufacturing, creating high-quality jobs across the state.​