In Its 15th Year, Over 1,000 Blind and Visually Impaired Students Will Compete. 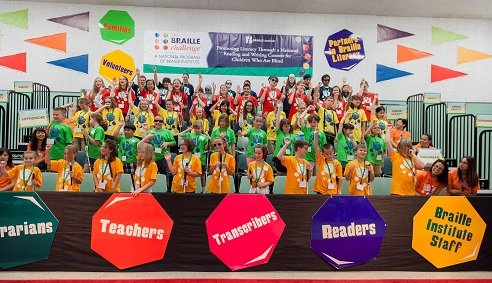 Westbury, NY - January 7, 2015 - The Braille Challenge®, the only national reading and writing contest in braille for blind and visually impaired students, today announced the 2015 participating cities and dates (see schedule at end of press release).  The Braille Challenge, sponsored by the Braille Institute of America, is an academic competition in two stages designed to motivate students emphasizing their study of braille while rewarding their success with fun-filled, challenging local and national events. Any blind or visually impaired student who reads braille is eligible to participate in the first stage of the contest, the preliminary or regional Challenge contest events, which are held from January through the end of March throughout the U.S. and Canada.

“Fifteen years ago, OrangeCounty hosted the first Braille Challenge which has grown to more than 1,000 participants in North America,” said Nancy Niebrugge, Associate Vice President of National Programs at Braille Institute.  “This challenge has influenced so many families who have a child or children who are blind or visually impaired.  For many participants, the challenge is their only opportunity to truly test their skills against others academically.”

"Braille is a crucial tool for many blind and visually impaired students as it opens the doors of literacy and drives educational advancement and future employment opportunities," said Peter Mindnich, President, Braille Institute. "We continue to be more inspired each year by the passion and commitment of the students who compete in The Braille Challenge.  Their achievements can empower others who are affected by sight loss to develop their braille skills as well."

Of all the literacy issues in America, braille literacy is one of the most underrated and overlooked, and advancements in technology have not replaced the need for children who are blind or visually impaired to learn to read using this vital medium. Understanding how essential braille literacy is for success in the sighted world, Braille Institute developed the two-phase, annual competition as a way to encourage children who are blind and visually impaired to fine tune their braille skills and celebrate their accomplishments. Following the first regional phase, contestants with the highest scores are invited to compete in a second, national finals phase.

After receiving all of the individual contestant regional scores, qualifying finalists from around the country will be announced by Braille Institute program organizers in May. Each finalist receives an exclusive invitation to the Los Angeles headquarters of the Braille Institute to represent the 12 top-ranking scores from each of five age groups spanning ages six to 19.  Braille Institute provides some financial support to each finalist to help with accommodations while in Los Angeles for the Braille Challenge national finals. At the national finals in Los Angeles in June, there will be a special opening ceremony for the 60 finalists and their families. The finalists will then embark on the daylong competition to showcase their skills at reading braille and typing braille, using a device called a Perkins Brailler®. Following the daylong event, the winners in each age group will be announced at an awards ceremony unparalleled with excitement, pride and celebration.

The dates and locations of the preliminary competitions on Long Island are: