Cereal Boxes: There’s More to the Box than You Think, Study Finds

Do you or the kids have the urge to buy each time you walk down the cereal aisle? There's something to the eye gaze of the characters on cereal boxes, according to a study. 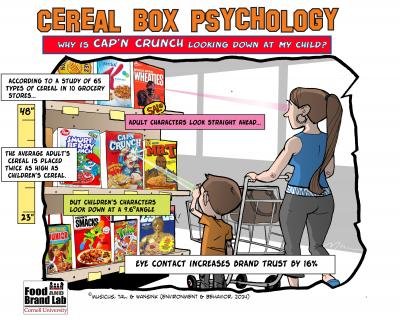 Walk down the cereal aisle at supermarkets, and you’ll notice many of the boxes include cartoon characters looking to captivate the interest of children. But there’s more to the images of Cap’n Crunch, Tony the Tiger, the Silly Rabbit, Toucan Sam, Lucky the Leprechaun, Sonny the Cuckoo Bird and other cereal characters, according to a new study out from Cornell University.

The study revealed that many of the characters on cereal boxes are making eye contact with consumers in a way that makes them build trust and want to make the purchase.

The study looked at 57 different boxes of cereals directed to children, and of all of them, 51 of the characters on boxes had their eyes angled in a way that aimed squarely at the height of kids, 48 inches and under. Many grocery stores particularly place cereals marketed to kids at the mid- to lower-level shelves while adult cereals go on higher level shelves.

Cereal boxes making eye contact increases the trust level with consumers by about 18 percent. It also fosters brand loyalty and increases the likelihood of wanting to purchase the cereal, according to Brian Wansink, director of the Cornell Food and Brand Lab.

The study involved 10 different grocery stores in New York City and Connecticut. In addition to kid’s cereals, the study also looked at adult cereals. A total of 65 different cereals were involved in the study and through comparison, kid’s cereals had characters with gazes looking downward to lock eyes with children while characters on adult cereal boxes gazed upward or straight ahead to lock eyes with the adult shoppers.

In another experiment in the study, 63 college-aged individuals were randomly given a Trix box with some having the rabbit gaze straight ahead and others looking at a downward angle to make more direct eye contact. In that experiment, brand trust was 16 percent higher and brand loyalty was 10 percent higher when the cereal box showed the rabbit making eye contact.

This study was published this week in the Journal of Environment and Behavior.

The next time you walk down the cereal aisle with kids, remember there’s more to the box of cereal with a cartoon character – the images can trigger immediate urges simply by making eye contact, and for kids, it’s not something they can decipher as marketing.