The Islanders crushed Dallas, and the Nets came back against Atlanta last night. 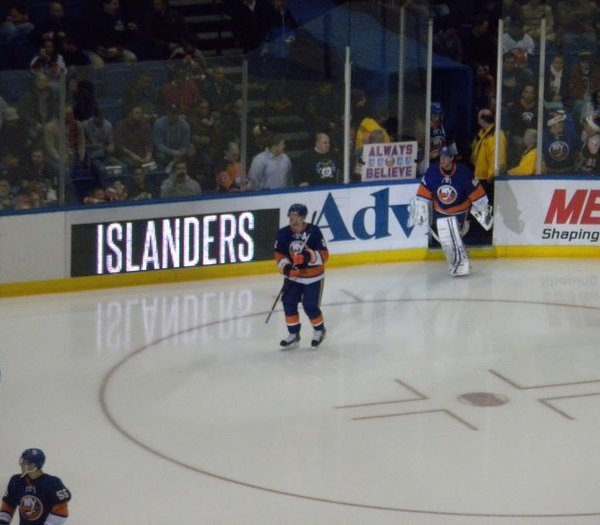 Islanders Trounce Stars
The Islanders were on a rare three-game win streak when they played the Hurricanes on Saturday. Unfortunately, they had also lost their previous five games against Carolina and that would be the trend to continue.

After a scoreless first period, Manny Malhotra snapped in the first goal of the night nearly seven minutes through the second. John Tavares tied things up with a wrist shot less than a minute later, but Jordan Staal put Carolina ahead again at 13:12, and Brett Sutter made it 3-1 57 seconds after that.

Thomas Vanek scored the next goal, but it came with 25 seconds left in the third period, and would not be enough to undue the Carolina lead. Evgeni Nabokov stopped 27 of 30 shots as the Islanders lost 3-2.

New York fell behind again when Dallas came to town last night, giving up two goals in the first period, but the Islanders exploded in the second. Ryan Strome scored his first goal of the year on a power play 1:41 into the middle frame, and Tavares knocked in a wrist shot at 7:29 to tie it. Peter Regin put New York ahead 3-2 two minutes later and, though the Stars were able to tie the score again later in the period, Brock Nelson scored the go-ahead with 28 seconds left in the period.

The Islanders piled it on in the third, starting with a Brian Strait snap shot in the first 90 seconds, and continuing with a Tavares power play goal at 6:19. Tavares got the hat trick ten minutes later during another power play to hand New York a 7-3 win.

Nabokov blocked 7 of 8 shots before leaving the game midway through the first, and Poulin blocked 13 of 15 from there on in.

The Islanders will head to Toronto next, playing tonight at 7:00 PM.

Rangers Fall in Overtime
The Rangers had a blowout of their own when they were in Toronto on Saturday. Carl Hagelin scored the first goal early in the first, and Dominic Moore scored his second goal of the season with four minutes to go on an unassisted snap shot. Benoit Pouliot made it 3-0 with a wrist shot midway through the second, and Chris Kreider backhanded in a fourth goal four minutes later. Domin Moore put the Rangers up by 5 with an unassisted wrist shot two minutes after that.

The Maple Leafs mustered a goal before the end of the second, but Brad Richards returned the New York lead to 5 with a snap shot halfway through the third. Brian Boyle rounded out the lopsided victory with his second of the year on a power play, giving the Rangers a 7-1 victory. Cam Talbot stopped 25 of 26 shots on goal.

The offensive outburst quieted down as the Rangers returned home to host the Blue Jackets last night. 17 scoreless minutes ended when Brandon Dubinsky put Columbus up 1-0 on a tip-in. Rick Nash tied the game on a power play two minutes later, but Cam Atkinson had the Blue Jackets back up 2-1 a minute into the second. James Wisniewski made it 3-1 before the frame drew to a close.

Not to be put down easily, the Rangers got back into the game with a Boyle wrist shot just under five minutes through the third; two minutes later, Rick Nash tied the score 3-3 on a snap shot. That score held through regulation and the overtime period, but New York came up short in the shootout.  Zuccarello and Nash missed their shots, and the Blue Jackets made both of theirs to take an OT win. Henrik Lundqvist stopped 36 of 39 before the shootout.

The Rangers will face the Blackhawks next, at 8:00 PM on Wednesday.

Nets Overcome Hawks
Brooklyn has looked like a team refreshed in the early going of the new year. After edging out the Thunder on Thursday, the Nets returned home to host the Cavaliers on Saturday. A 10-4 run to close out the first quarter gave them a 22-17 lead, to which Alan Anderson and Paul Pierce quickly added a couple threes in the second quarter. Brooklyn kept pressing the attack, eventually taking a 51-38 lead into the half.

After the Break, Cleveland started fighting back and with 2:33 left in the third tied the score at 58 apiece before a Dellavedova three sent them ahead. Brooklyn kept pace with 6-straight successful free throws, and a Teletovic 3 put them up 67-65 going into the fourth. Andray Blatche and Deron Williams dominated the final quarter, helping the Nets to take an 89-82 victory.

Williams led the team in scoring with 21 points. Paul Pierce put up 17, and Blatche shot for 12.

The Nets kept their momentum going against the Hawks last night, taking a 27-21 advantage in the first quarter, however, Atlanta would not allow that lead to last long. Brooklyn stayed ahead for the first few minutes of the second, but Atlanta began to close in after that and scored the last 11 points of the period to take a 52-46 lead at the half.

Brooklyn bounced back right out of the gates, scoring the first 12 of the third including 8-sraight from Alan Anderson. Atlanta fought back within a point, but three Teletovic three-balls sent the Nets into the fourth up 72-67. The Hawks briefly retook the lead in the final quarter only for Joe Johnson to take control of the came and lead Brooklyn to a 91-86 win as he scored 9 points in the last 6:19 of game time.

Johnson had a game-high 23 points and was backed up by Teletovic’s 16. Anderson put up 14 and Shaun Livingston shot for 12.

The Nets will try to keep their 2014 win-streak going against the Warriors at 7:30 PM.

Knicks Trump Mavericks
The Knicks came into Sunday’s game in Dallas on the heels of a gut wrenching loss to Houston. The Mavericks played well through most of the first quarter, but after going up by a point, 13-12, Dallas was absolutely trounced as New York went on a 17-4 run to close out the period.

Carmelo Anthony put up 15 points in the first, but went silent in the second. Thankfully, Andrea Bargnani and the bench were able to keep up the pace, outscoring the Mavs by 5 in the quarter to take a 52-35 lead into the half.  Dallas began to close the gap in the third, ending the frame down by just 10, and cut the deficit down into single digits after that. The Mavericks were able to close within 6 at a few points during the fourth, but did not get any closer than that. New York took the game 92-80.

Anthony only scored 4 points after the first, but still led the team with 19 total on 6/16 from the field. Kenyon Martin shot for 14, followed by Bargnani with 13, Amare’ Stoudemire with 11, and Tim Hardaway Jr. with 10. Iman Shumpert cooled down after two phenomenal games with just 9 points to his name.

The Knicks will host the Pistons tonight at 7:30 PM before facing the Heat on Thursday.