NCPD: Car Stolen While Left Unattended to Warm Up

A car was stolen and quickly recovered in Roosevelt. 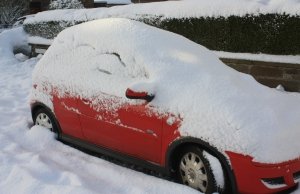 According to detectives, on Wednesday, January 1, 2014 at 1:50 A.M. a 38 year old female was at a relative’s house on Park Avenue in Roosevelt when she went outside the residence to warm up her 2005 Ford. The female re-entered the home and when she came back out a short time later the vehicle was missing. Inside the vehicle was the victim’s pocketbook and wallet.
On Thursday, January 2, 2014 the victim’s husband observed the vehicle traveling eastbound on Hempstead Turnpike and dialed 911. The car was stopped on Stewart Avenue in the vicinity of Key Lane in Hicksville and the operator, Dewayne Green, age 17 of 81 Smith Street taken into custody without incident. The pocketbook and wallet were recovered along the Southern State Parkway in Roosevelt.
The defendant was charged with Grand Larceny 3rd Degree, Grand Larceny 4th Degree and Unlicensed Operation of a Motor Vehicle. He will be arraigned at First District Court in Hempstead on Friday, January 03, 2014.