'Trump on the Ocean' Called Off Due to Storm Damage

The risk of building in coastal flood zones has led to the cancellation of the on-again off-again 'Trump on the Ocean' restaurant and catering facility at the Jones Beach State Park boardwalk.

What would have been Donald Trump’s newest creation (or monstrosity), a 38,560 square foot restaurants and catering facility at Jones Beach State Park has been called off due to the extensive damage caused by Superstorm Sandy. 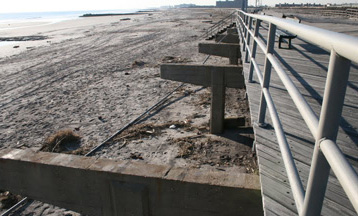 Jones Beach remains closed as crews continue to repair the shore and historic boardwalk that suffered unprecedented damage by storm surges and high winds nearly two months ago.  The site of the planned restaurant, on the Central Mall boardwalk, sustained tens of millions of dollars in damages, according to State Parks Commissioner Rose Harvey.
‘Trump on the Ocean’ was given the go-ahead back in late-June, and was expected to settle lawsuits filed between the Office of Parks, Recreation and Historic Preservation, the Department of State and ‘Trump on the Ocean,’ following disagreements over the project’s lease executed in 2006 over a basement Trump originally wanted built.  The state opposed that element of the project since Jones Beach is located within a flood zone.  Ultimately, the two sides agreed to a smaller basement, only to be used for storage.
In June, when the final agreement was reached, Harvey said of the on-again off-again project, “The Trump on the Ocean LLC project will create hundreds of jobs, provide a boost for Long Island's economy, and bring back a much-needed amenity to Jones Beach State Park. And with the lawsuits behind us, OPRHP can focus on other necessary steps to revitalize this magnificent park for its seven million annual visitors."
On Wednesday, however, Harvey released a statement acknowledging the risk of building on the cost.  “Hurricane Sandy has opened everyone’s eyes to the potential risks of building directly on the oceanfront.  Looking over the coming decades, as we face sea level rise and the threat of future damaging storms, we have concluded that building a major new facility directly on the oceanfront, on the scale of the Trump project, is not prudent policy,”  Harvey said in a statement.
Trump said the decision was mutual.  “Because of the great tragedy of Hurricane Sandy, which has been incredibly devastating to Long Island as a whole, and Jones Beach in particular, we have mutually decided that it is an inappropriate time to build a luxury restaurant and banquet facility at Jones Beach,” Trump said in a statement, though he added that the decision was a difficult one to make, and his crews were ready to begin construction next year.
Field 2 and the West End II at Jones Beach have reopened to the public, but with limited services.  The rest of the park remains closed as repairs continue.
Share your thoughts on this article by posting a comment below or by visiting our Long Island Living discussion forum.