The Journal News has sparked a new discussion regarding gun rights in this country -- how much information about gun owners should be made public? 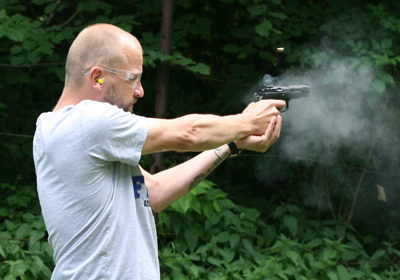 The shooting of 20 young school children and six faculty members at Sandy Hook Elementary School in Newtown, Conn. a week and a half ago has prompted various responses from across the nation, including a controversial move by one New York newspaper to publish the names and address of local gun owners.
The Journal News, a Gannett-owned publication serving Westchester, Rockland and Putnam counties, has sparked outrage among gun owners, both within the community and across the country for an article titled, “The gun owner next door: What you don’t know about the weapons in your neighborhood.”  Journalist Dwight R. Worley accessed information pertaining to handgun permits through the Freedom of Information Act, but were denied information regarding the amount and type of weapons owned by those who held licenses.
The article also included a map that allowed readers to see the proximity of gun owners to their own homes.
An editor’s note informs readers that the journalist behind the article owns a Smith & Wesson 686 .357 Magnum, for which he has a residence permit for New York City.
More than 1,700 readers commented on the article by early Wednesday, and many pointed out that the map served as a burglar’s dream, knowing which homes in the area remain unprotected by firearms.  Rockland county clerk, Paul Piperato, reportedly told Worley that, “"You have judges, policemen, retired policemen, FBI agents — they have permits. Once you allow the public to see where they live, that puts them in harm’s way."
CNN reports that the paper’s published, Janet Hasson, defended the article, saying, “One of our roles is to report publicly available information on timely issues, even when unpopular. We knew publication of the database (as well as the accompanying article providing context) would be controversial, but we felt sharing information about gun permits in our area was important in the aftermath of the Newtown shootings.”
The newspaper also expressed a desire to publish even more information, saying in a statement it was surprised that it was unable to obtain information about the number of weapons owned by licensed gun owners.
The Journal News is not the first to publish this type of article, but in a follow-up article, the paper suggests that social media help spread the information well beyond the boundaries of it’s typical circulation.  The article also notes that many people "have taken to their computers and phones in rage" live outside the focus area.
The Poynter Institute’s Al Tompkins described this article as “journalistic arrogance,” telling CNN that “ unwarranted publishing of the names of permitted owners just encourages gun owners to skip the permitting."
One thing is for certain -- this article has begun a new conversation about gun ownership in this country.  Whether or not a newspaper publishes information does not necessarily mean it should be kept from the public.  How much information about individual gun owners should be public information?
Share your thoughts on this article by posting a comment below, or by joining our discussion about gun violence at our Long Island Living discussion forum.