NRA: Armed Security in Every School to Prevent Next Sandy Hook

Speaking in Washington on Friday afternoon on behalf of its four million members, the National Rifle Association’s executive vice president called for an armed security guard to be posted in every school in the country to prevent a repeat of last Friday’s tragic shooting of 20 young children in their classrooms at Sandy Hook Elementary in Newtown, Conn.

Wayne LaPierre spoke to reporters, marking the first appearance before the national media since the shootings occurred.  LaPierre was interrupted twice by protests chanting anti-NRA slogans, and holding up banners in front of network cameras, one of which read, “NRA Blood On Your Hands.”
After expressing grief and sorrow for last week’s events, LaPierre asked, reading from a prepared statement, “How do we protect our children right now, starting today, in a way that we know works?” 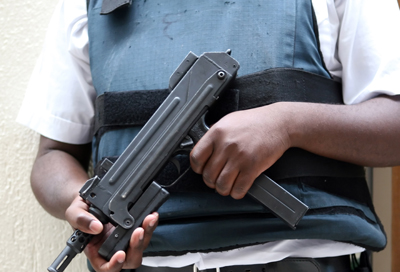 "We need to have every single school in America immediately deploy a protection program proven to work,” LaPierre said, in answer to his pressing question.  He went on to say this protection program involves “armed security.”
LaPierre repeated the familiar refrain that the only way to stop a bad guy with a gun is to confront him with a good guy with a gun, and schools, as no-gun zones, remain vulnerable, defenseless targets for predators.  He asked his audience to admit that “it’s possible that 26 innocent lives might have been spared.”
He suggested that advertising and “bragging” about gun-free school zones invites “every insane killer in America” to the “safest place to inflict the maximum mayhem without risk.”
He went on to suggest that the next Adam Lanza, the person who gunned downed 20 young first graders and six faculty members at an elementary school after shooting his mother in the head multiple times with her own weapon, is planning another attack on one of the nation’s schools.
“How can we possibly even guess how many, given our nation's refusal to create an active national database of the mentally ill?” LaPierre asked, speaking of the potential “copycats...waiting in the wings for their moment of fame from a national media.”
LaPierre also cast blame on the media and entertainment industries, which he says, “sells, and sows, violence against its own people.”  He explicitly listed Grand Theft Auto, Mortal Kombat, Splatterhouse, and one by the disturbing name of Kindergarten Killers.
Moving beyond a defensive position, LaPierre announced that the NRA will fund an initiative called the “National School Shield Response Program,” which involves qualified military, police and security personnel to organize to protect schools.  The program will be made available to schools that want it.  The program will be lead by former Rep. Asa Hutchinson (R-Ark.)
Though the NRA has scheduled a press conference, LaPierre read a prepared statement and took no follow up questions from reporters.
The Newtown Patch has responded to the NRA's position, reporting that community members think LaPierre is playing to people's fears.
“People are much smarter than this,” Suzy DeYoung, a parents and coach in Newtown, said. “He is saying we need to be protected from guns by more guns. This lack of logic speaks for itself, and I truly believe the response you are about to see from parents all around the world will offer better commentary than I ever could."
U.S. Senator-elect Chris Murphy (D-CT) called the LaPierre's statements "revolting, tone-deaf."  He was handed a transcript of LaPierre's statement as he exited a funeral service for one of the victims of last week's shooting.   Murphy also said that the NRA is "irrelevant to the national conversation about preventing gun violence, by saying that the answer to the tragedy in Newtown is to put more deadly semi-automatic assault weapons on the streets and into our schools," the Newtown Patch reports.
President Obama, who visited the community of Newtown this past weekend, has already called on Congress to reinstate the federal ban on assault weapons which expired in 2004, and has indicated his support for legislation banning high-capacity magazines.
Share your thoughts on this article by posting a comment below, or join the discussion with other Long Islanders about gun control and safety following the tragic loss of lives at Sandy Hook Elementary School.