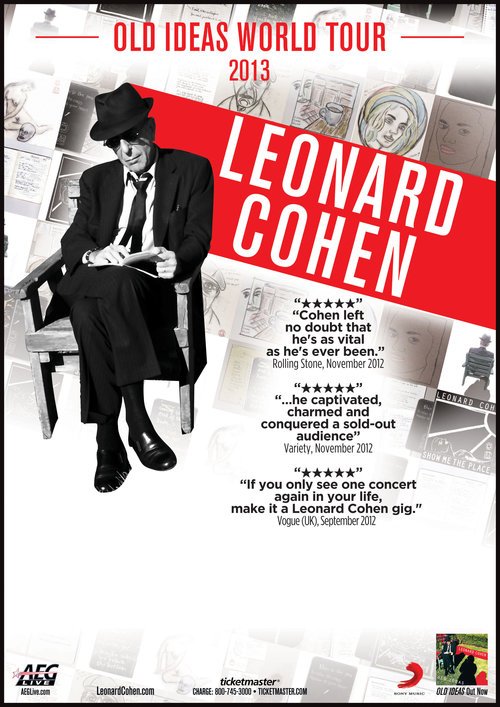 Los Angeles, CA – January 16, 2013 – In response to overwhelming fan demand, Leonard Cohen’s acclaimed “Old Ideas World Tour” has just added a second North American leg.  After enchanting audiences worldwide, the legendary singer/songwriter/poet culminated the first series of North American dates with breathtaking engagements at New York’s Madison Square Garden and Barclays Center on December 18th & 20th – and fans were left wanting more. The new round of dates will begin at the Paramount Theatre in Oakland, CA on March 2nd, and will include encore performances in New York City and Chicago; as well as dates in Miami, Tampa, Atlanta, Milwaukee, Winnipeg, and more. The tour will also visit a number of cities where Cohen will be performing for the very first time, including New Orleans, Memphis and Louisville.

Night after night, Leonard Cohen and his band of expert musicians have earned five-star reviews and left audiences spellbound. MTV Hive recounted that “Cohen sprinted to the mic at the beginning of the evening, and skipped offstage at the end, and in between, delivered a reminder of everything that has made him the icon and legend that he is.” MSN gave a glowing assessment that “There are great ones, and then there are the ones where it seems the whole outside world has disappeared and nothing exists but what’s happening between artist and audience. This was one of those, full of goose-bump moments.” Los Angeles Times reported that “Cohen's generosity was real—nearly 30 songs worth—and it confirmed his place as one of the most accomplished songwriters of the past four decades.” Variety was impressed by how “he captivated, charmed and conquered a sold-out audience, hardly seeming to break a sweat in the process,” and Fort Worth Star-Telegram was equally captivated: “Seeing someone of Cohen's stature continue to draw so much evident joy from sharing his art with an adoring audience restores a person's faith in music.” Rolling Stone remarked that Cohen “left no doubt that he's as vital–both physically and as a cultural asset–as he's ever been,” and Oakland Tribune simply stated “All hail Leonard Cohen.”

Promoted by AEG Live and presented in Canada by CBCMusic.ca, the tour celebrates Cohen’s highly acclaimed twelfth studio album, Old Ideas, which debuted at #1 across the globe to make it the highest charting album of his career.

For a chance to win tickets to the April 6th show at Radio City Music Hall, click here!

About Leonard Cohen:
Leonard Cohen is a master songwriter, musician and poet whose stunning body of original work has touched the lives of millions. Citing W.B Yeats, Irving Layton and Walt Whitman as literary influences, Cohen first shot to the forefront of the music industry in the 60’s and has remained an inspirational talent and contributor to the industry since he first emerged. His albums Songs of Leonard Cohen (1967), I'm Your Man (1990) and Dear Heather (2004) are rightly considered classics along with the beautiful singles "Hallelujah" and "Suzanne."  He has sold over 20 million albums, worldwide and published 12 books.  With a career spanning five decades, Leonard Cohen has been inducted into the Rock & Roll Hall Of Fame (2008), and the Songwriters Hall Of Fame (2010), and is a Grammy Lifetime Achievement Award Recipient (2010).