The Thruway Authority revealed the three designs for the future Tappan Zee bridge, which will be voted on in less than two weeks. 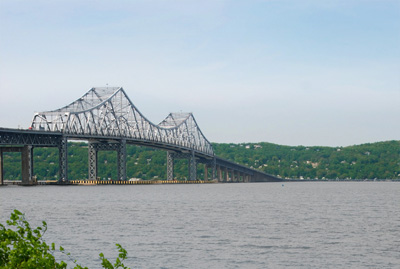 The three plans cost $3.1, $3.9 and $4.1 billion, respectively, and a state selection committee recommended the cheapest option which features a twin-span bridge that could be built in just over five years.  All three proposals include accommodations for public transportation in the future, though it was increase the cost of the third design.
The second proposal would require nearly six years for construction, and the third plan would require 5 years and 11 months.   The Thruway Authority is accepting public comment on the designs on its website, but the decision ultimately rests with the Thruway Authority Board.
A spokesman for the Thruway told the Times Union that following the vote on the designs, scheduled for Dec. 17, construction could begin as early as the first of the year.
Gov. Cuomo has requested $2.8 billion in federal loans to cover most of the project’s cost.  Financing for the project is also expected to come from increased bridge tolls, though the Cuomo administration has said that a formal pricing plan won’t be available until the final cost of the bridge’s construction is determined.
Share your thoughts on this article by posting a comment below or by visiting our Long Island Living discussion forum.