An elderly man was nearly killed when another man, presumed to be drunk, pushed him off of the subway platform onto the tracks, where he was fortunately saved by onlookers. 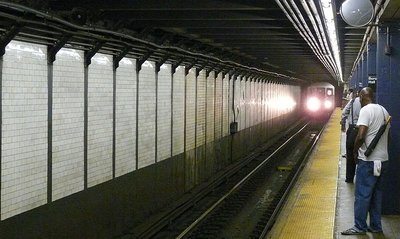 A 72-year-old man was pushed onto the subway tracks at a stop in Harlem Friday afternoon by a homeless man that police officials believe to have been drunk.

The incident occurred at the 145th Street A and C train station, where the victim, Sho Kuan Lin, was standing with his wife waiting for the train.  Rudralall Baldeo, 57, approached Lin and pushed him off the platform onto the tracks.

Fellow commuters quickly sprang into action and rescued Lin from the tracks before the oncoming train pulled into the station.

Lin suffered a cracked skull and a broken collarbone, and is currently on life support.

“You know he is still dangerously ill. You know he’s not coming out yet. He was lying there and the machines are everywhere helping him to breathe,” said Eliyah Sheera, Lin’s pastor, to CBS News.

Baldeo, who was pointed out to police by the victim’s wife, is being charged with attempted murder and felony assault.

Baldeo is believed to be homeless, and police believe he may have been drunk at the time of the incident.  Lin’s pastor said that Baldeo needs help as well.

“From the standpoint of the people that do that, I think they just don’t have the peace or the love. They feel frustrated. You know, despair, there’s no purpose in life so we need to do something for them,” Pastor Shira said.

Baldeo’s motive for the near-fatal shove is still unknown.

In the past year, there have been two fatal pushing incidents on subway platforms in New York City, including the hate crime in which a man was pushed from the platform by a woman who admitted to the crime, saying that she did it because she believed the man was a Muslim.