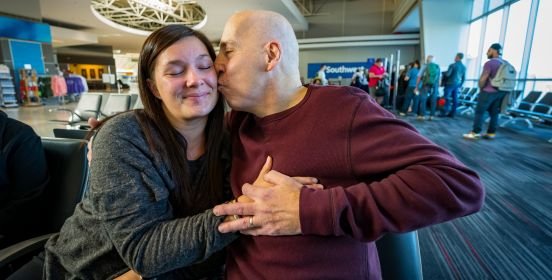 Raymond Miehl’s heart probably raced when he spotted Ashley Brayton for the first time in at MacArthur airport. Brayton flew in from Ohio to meet the 62-year-old heart transplant recipient for one special reason.

The heart that now beats in his chest was once her father’s.

Last month, Miehl met Brayton for the first time since he received the heart that saved his life in 2016 as she exited the gate from her Southwest Airlines flight.

According to a press released from the Town of Islip, Brayton’s father, Ronnie Davis, died on March 1, 2016 at the age of 46 and two days later Miehl received his heart. The meeting had been in the works for more than a year.

“I say you can’t take your organs to heaven, so you might as well give somebody a fighting chance that might not otherwise have one,” said Brayton in a statement.

Miehl said he would honor her father’s memory by taking care of his health.

“We were very grateful and thankful that there’s somebody still going with her father, that she knows that her father is still going and that he’s living still,” said Miehl. “And I’m taking care of it as much as I can and as good as I can.”