Head into New York City this year for some holiday cheer and spectacular sightseeing! 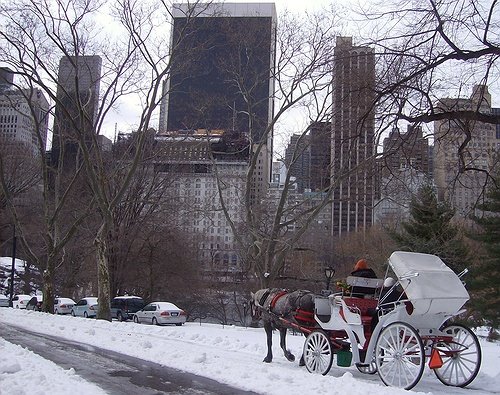 During the holiday season many Long Islanders leave home and venture out into New York City to see the bright city lights, holiday decorations and famous landmarks of Manhattan. From watching the annual Macy’s Thanksgiving Day Parade to visiting the famous tree at Rockefeller Center to seeing the Rockettes dance live at Radio City Music Hall, New York City is one of the most beautiful and sought out locations in the world to visit during this time of year. There is so much to do, so much to see and seemingly never enough time to do it all.

Traveling from Long Island into the City you have a few different transit options. Of course you could drive into Manhattan but one of the most popular and preferred ways to travel into NYC is by hopping right on the Long Island Rail Road. The train allows you a swift trip into the City without having to deal with the craziness of driving in Manhattan and finding decent parking. If you’re planning an extra special trip into New York City then you could even hire a chauffeur and get limo service to take you to and from your selected NYC destinations. Once you get into the City your best bets for getting around include the subway system, buses, taxis and walking, depending on how far you have to go and your budget.

The closer you get to Christmas the more crowded the various holiday sightseeing locations will be. It's best to try and see everything early in the season, avoid weekends if possible, and get there closer to opening rather than closing.

Now that you know how to get into the City during the holidays, here are some suggestions for fun holiday-themed things to do once you get there!

Go Window Shopping Down Fifth Avenue! Take a stroll down New York’s iconic fashion-forward Fifth Avenue. Stores range from high-end flagship stores like Gucci and Armani to more mainstream stores like The Apple Store and Abercrombie & Fitch. If you’ve brought the kids along then you’ll definitely want to stop into the very famous, oldest toy store in the United States, FAO Schwarz.

Take Advantage of Holiday Photo Ops! Walk over to Rockefeller Center and take pictures with the city’s most famous brightly lit up tree. The tree is located at 30 Rockefeller Plaza at 50th Street and will be on display from December 4th to January 7th, lit up daily from 5:30 a.m. – 11:30 p.m. The tree lighting ceremony itself will occur on December 4th from 7 p.m. – 9 p.m.

You can also visit Radio City Music Hall then afterwards cross the street to get some shots of the gigantic, red ornaments accentuating the fountain at 1251 Avenue of the Americas (Sixth Avenue). Then, if you have time left, get a photo with your loved ones in front of the pop art LOVE sculpture on the corner of Sixth Avenue at 55th Street in midtown Manhattan.

Go Ice Skating! You have some choices when it comes to going ice skating in NYC during the holidays. Three of the most popular rinks that people frequent during the holiday season are The Rink at Winter Village in Bryant Park, The Rink at Rockefeller Center and Wollman Rink in Central Park. Keep in mind when picking from these that Bryant Park is the only one out of these three rinks that doesn’t charge admission along with skate rental.

Walk The High Line! Travel Manhattan’s West Side up high on an elevated historic freight line that is now a public park. You’ll be free from the chaotic traffic below and have a great view of all of the holiday lights and decorations. Now through November 30th the park is open 7 a.m. – 10 p.m.  Starting in December through the end of March the park will be open 7 a.m. – 7 p.m.

Before you head into the City be sure to view the new LIRR train schedules in effect Monday, November 17 through December 14.