President Obama toured the damage caused by Superstorm Sandy 17 days after the historic storm created unprecedented damage in the region.

President Obama toured the damage inflicted by Superstorm Sandy on Thursday, 17 days after the storm swept through the region destroying homes, business and a variety infrastructure with a combination of high winds and historic flooding.  Obama, who was counseled by New York City Mayor Michael Bloomberg not to tour the city until conditions were made safer, viewed damaged areas in New Jersey two weeks ago. 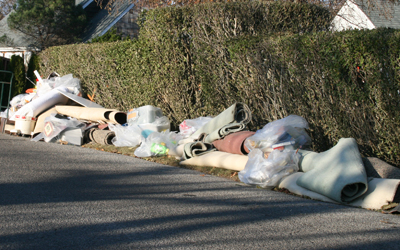 Accompanied by Mayor Bloomberg, Sen. Charles Schumer, Gov. Andrew Cuomo, Homeland Security Secretary Janet Napolitano, and Housing and Urban Development Secretary Shaun Donovan, the president toured damaged regions of Long Island and New York City by air, flying over coastal areas in a military helicopter.  He then visited victims in one of the worst hit areas, Staten Island, where more than half of the state’s Sandy-related deaths occurred.
The president announced that Sec. Donovan would be the federal government’s “point person” throughout the recovery.  Donovan will be working closely with Gov. Cuomo, Mayor Bloomberg, County Executives Steve Bellone (Suffolk) and Ed Mangano (Nassau), as well as the borough presidents “to make sure that we come up with a strong, effective plan."
"During difficult times like this, we're reminded that we're bound together. And we have to look out for each other. And a lot of the things that seem important, the petty differences, melt away," the president said on Thursday.
Speaking from New Dorp Beach on Staten Island, the president assured onlookers that he believed the federal government would be able to make the emergency clean-up resources available to the state and local governments in need.
During his ground tour of Staten Island, the Obama consoled grieving Staten Islanders, some of whom lost family members, and many of whom lost their homes or much of their property.  The president spoke with the parents of Brandon and Connor Moore, the Staten Island brothers, ages 2 and 4, who were swept out of their mother’s SUV by flood waters.  He also praised NYPD lieutenant Kevin Gallagher, who remained with the boys parents, Glenda and Damien Moore the night their boys died, saying that “was not part of his job description.”
"That spirit and sense of togetherness and looking out for one another is what is going to carry us through this tragedy,” Obama said of Gallagher’s example.  He also said the recovery efforts still to come would not be easy, but that New Yorkers are “tough.”
Share your thoughts on this article by posting a comment below or by visiting our Long Island Living discussion forum.