Literary Traveler's Jessica Monk ventures to the Gold Coast to visit the Coe's private Paradise at Planting Fields and finds a happier version of Daisy and Gatsby's "ever after" in the splendid mansion and its ... 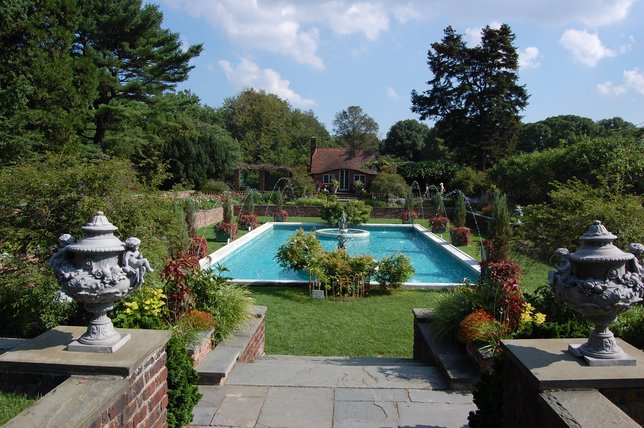 This is the third installment from the Literary Traveler's Guest Posts on LongIsland.com, exploring the local attractions, and history here on Long Island. With the recent pique in interest in the Great Gatsby following this year's movie release, The Literary Travelers have decided to head to Long Island, and see how our culture is still inspired by Gatsby today.

Their life was like the idyllic, unwritten afterlife of Daisy and Gatsby’s romance, the happy ending that never was. Their magnificent Elizabethan stately home was designed to flatter the tastes and heritage of William Roberts Coe, an Anglophile like Gatsby, and an Englishman to boot. But the paradise that Mr. and Mrs. Coe built at Planting Fields was intended as a place of retreat rather than a venue for glittering parties. In the words of Frank Smith, Curatorial Assistant at planting fields, their seasonal home, with grounds finished by the famous landscape designers the Olmsted brothers, was “only good enough for the fall and spring.” Summer was spent at a ranch in Wyoming.

A guest of the Coes’ would have entered the property through gates that dated to 1714 and would have followed a grand tree-lined approach that was at least a mile long. It was a form of calculated suspense for the privileged few; similar to the enchantment Gatsby’s mansion was designed to work on its ideal audience, Daisy. The details and their audience mattered at Coe Hall too: from the sixteenth portrait of Queen Elizabeth in the entrance hall to the expensive Indiana limestone used to face the mansion. Before he died, Mr. Coe even began to open the place to the public on selected days of the year.

Unfortunately I had only invited myself for a few hours, and had little time to savor the Synoptic gardens with trees and shrubs in alphabetical order, the Italian garden and tea house, the greenhouses with their extensive collection of Camellias (the largest collection under glass in the North-East), and Mr. Coe’s collection of rhododendrons. But as I hurried through the grounds, it struck me that this self- contained world was designed to unfold slowly like a flattering story that Mr. Coe told his guests about himself.

Like so many before him with a newly minted fortune, Mr. Coe was trying to demonstrate that he too had character, refinement and taste. The ‘ancestral’ house that sprung up overnight, and the collection of beautiful objects (Mr. Coe used a London firm to source antiques) was so painstakingly accumulated that select guests couldn’t possibly argue. And why invite casual party-goers who wouldn’t appreciate the detail? Mr. and Mrs. Coe would surely have frowned on my brief visit.

Mr. Coe didn’t even have to immerse himself in the seedy bootlegging business to become fabulously wealthy like Gatsby. After marrying the daughter of one of the richest men in American, her father H.H. Rogers made him a partner in the Virginia railway business. Before meeting his second wife, Mai Rogers, on a liner cruise, he had worked his way up from the mailroom to the boardroom in the marine insurance office. It’s easy to imagine mutual pats on the back and declarations of ‘old sport’ cementing fatherly approval – the kind of respectability that poor Gatsby strove for and never achieved. The next generation of Coes even produced an Oxford man, Robert, who later donated the original sixteenth century portrait of Queen Elizabeth attributed to Frederico Zuccarro back to his alma mater. A replica still hangs in the entrance hall.

Many fortunate Americans built lavish mansions in the period before the depression, but Mr. Coe’s Elizabethan homage was rare. The Coe Mansion was version 2.0 of the couple’s dream-home, after the building they had purchased burned down in 1918. The couple took pains to furnish the new house even more carefully the second time round with originals in place of replicas. The grounds had been improved throughout the ‘teens, and the beautiful Italian garden was laid down over the site of a tennis court, with a pool and statuary replacing the court.

Mr. Coe’s bedroom faces out onto English parklands, while Mrs. Coe’s preferences are reflected in the Italian gardens that she could see from her bedroom and in her French style reception room. Mrs. Coe’s interior decoration style brought her garden indoors to her palatial bedroom. In 2010, scenic artist Polly Wood-Holland completed a reproduction of an original mural by Robert Chanler from photographs. Like a microcosm of the estate, Mrs. Coe’s bedroom was a paradise of birds, water, trees and flowers. She was so at home in her indoor garden that she even kept parrots in her bathroom. After Mai died in 1924, Mr. Coe’s third wife Caroline did not feel at home in a house defined by Mai’s touches, and moved into a smaller house called the ‘manor house’ where I browsed the exhibitions on the railroad and on Millicent Rogers, the Coes’ glamorous niece.

All this refinement didn’t come without Mr. Coe’s manly stamp on things though. In the breakfast room, Robert Chanler created a mural of Buffalos rampaging around the wall; a reminder of the great outdoors that the Coes enjoyed at their Wyoming estate for most of the year. Not surprisingly, Mr. Coe was a great believer in the American dream and a philanthropic supporter of American Studies Courses (and an anti-communist who believed these studies would shore up faith in the American dream for the next generation). His fascination with the Wild West grew out of his hunting trips in the West and a lifelong friendship with Buffalo Bill, from whom he bought the Wyoming ranch. He also accumulated an extensive collection of literature about the American West, which he donated to Yale.

Planting Fields is designed as a physical manifestation of the American dream, the ‘happy ending’  that would outlast even the lives of his founders. To the chosen few in Gold Coast society it would show that the family character was enduring and cultured, not noveau riche. Its existence is now devoted to a wider pool of admirers – the tourists and the Long Island community who enjoy it. You can build a house anywhere, but planting a garden is different, and Mr. and Mrs. Coe couldn’t have chosen a better place on Long Island to sow their version of paradise. Planting Fields is what the Native Americans called this part of Long Island because it has some of the best soils growing soils in the area. It was given Arboretum status when the state reclaimed it after Mr. Coe’s death. With the release of Baz Luhrmann’s Gatsby, tourists visit, hoping to catch the scent of the atmosphere that pervaded Gatsby’s gold coast, and the mansion runs Gatsby tours for schoolchildren. But Planting Fields is less of a monument to The Coe Family’s status and more of a living resource. The gardens are designed to offer something during every season; from the Camellia collection (including original plants of Mr. Coe’s) that bloom in February, to the heather garden that comes into its own between March and May, the mansion’s big secret is its rich facilities for gardeners and horticultural classes activities that take place there. The Long Island Bonsai Society and the New York Chapter of the American Rhododendron Society often meet in the Greenhouse class room. To make the estate more enjoyable for people with disabilities who live in the area, New York State and Planting Fields Foundation have invested in a sensory garden project that will open next year. Here, raised beds for up close vision and smell, braille labels, and wheelchair accessible walkways will combine to create a more inclusive experience for tourists. It’s nice to know that a happy ending can outlast the lives of individuals; Planting Fields may have been built with private wealth, but it is a gem that can be enjoyed by all.

Planting Fields Arboretum is open year round with many programmed activities (concerts, educational programs, activities for adults and children) throughout the year.  Coe Hall is open every day 11.30 a.m. – 3.30 p.m. through the end of September.  It is only open weekends in October from 11.30 – 3.30 p.m. Upcoming events include the Beethoven Festival on September 22nd, the Mid-Island Dahlia Society Show, and Brodway's Greatest Songs.

Jessica Monk is an artist and writer from Cork Ireland, and contributing editor at Literary Traveler. Since moving the US, she has worked as a copywriter, a writer for Literary Traveler, a music writer, and Editor of Somerville Cafe Blog. Her passions include music, literature, philosophy, travel and many more things that won’t fit on a list.

Literary Traveler is a travel website that encourages readers to indulge their wanderlust and explore the world through their literary imagination.This summer, the girls of Literary Traveler pack a copy of The Great Gatsby, hit the road and look beyond the Long Island of F. Scott Fitzgerald's Jazz Age to its rich contemporary culture, vineyards, agricultural heritage and more. We’ll be exploring the connection between the glamor of Long Island’s literary heritage and the abundance of things to see and do here today. Follow us on our journey on Twitter and Facebook!