Dozens of children turned out for the 12th Annual Friends of Caleb Smith Preserve Junior Anglers Fishing Tournament this past weekend. 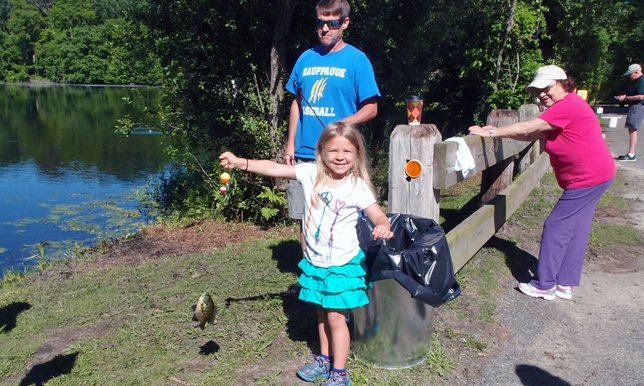 More than 30 children caught more than 50 fish at the popular Friends of Caleb Smith Preserve Junior Anglers Fishing Tournament held on Saturday, June 7. The 12th annual catch-and-release event was held at Willow Pond in Caleb Smith State Park Preserve in Smithtown. The anglers, ranging in age from 5 to 8 in the morning session and 9 to 12 in the afternoon, happily cast their lines for prizes, which were awarded along with goody bags and ice cream for all, following each session.

The day brought six good friends together to compete in the event while  celebrating the eighth birthday of Vivian Derby of Hauppauge. All of the six friends caught a fish, and one: Stevie Rosenfeld, won second place.

Five-year-old Rosemary Deutsch of Wantagh, fishing under the watchful eyes of her parents, Heather and Tom, didn’t catch any fish last year but had caught six within the first hour this time, to go on and win first place.

In the afternoon session, Sal Lupo, 13, who had won first prize last year offered the Friends group his help this year. Sal could be seen overseeing sites along the pond helping bait hooks and release fish. “I love this place,” Sal said, as his two brothers, Angelo, and Vincent, 8, nodded eagerly.

Pictured in Feature Photo: Charlotte Derby shows off the fish she caught.