The Nets’ OT win was a welcome change of pace from the past few days for NY sports fans. 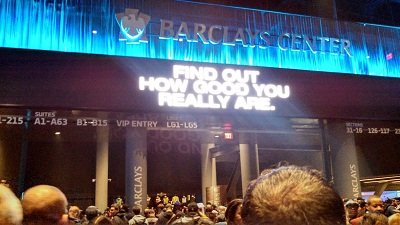 Nets Get First Road Win
The Nets were outplayed consistently throughout the night when they travelled to Sacramento on Wednesday. Brooklyn never led, but did tie the score several times in the first quarter before the Kings pulled ahead 23-19.

The Kings quickly increased the spread ten in the second quarter and led by as much as 18 before Brooklyn closed the gap slightly to enter halftime down 52-40. The third quarter did Brooklyn no favors as Sacramento expanded their lead to 23 late in the period, and went into the final frame up 80-59.

Shaun Livingston went on a tear early in the fourth, scoring 9 points as the Nets pulled back within 12, but the Kings never let them get any closer, and took the game 107-86.

Brook Lopez led the team in scoring with 16 points to accompany 9 rebounds, followed by Livingston and Deron Williams who both put up 13. Paul Pierce shot for 12, and Joe Johnson scored 10.

After being blown out in California, the Nets headed to Arizona to play the Suns last night. The game began competitively enough, but the Suns pulled ahead midway through the first quarter and took a 29-18 lead into the second.

Brooklyn remained behind by a large margin for most of the quarter, but Livingston fueled another rally, this time scoring 10 point on a 14-4 run which cut the deficit down to 50-46 at the end of the half. The rally continued after the break as the Nets opened the third quarter by scoring 16 unanswered to take a 62-50 lead.

Phoenix managed to put up 17 point after going scoreless for the first 7 minutes of the frame, though the Nets still led 73-67 going into fourth. The Suns tied the game on back-to-back threes and took a two-point lead on a pair of free throws, and despite Brook Lopez’s best efforts to take command of the game the score was tied 92-92 at the end of regulation.

Johnson, Livingston, and Lopez combined for 8 points in overtime, with Johnson’s layup in the final second giving the Nets a 100-98 advantage to win the game.

Lopez again led in scoring with 27 points, backed up by Livingston’s 18 off the bench. Pierce shot for 14 and Johnson scored 13; Kevin Garnett grabbed 14 rebounds.

Having finally gotten a win on the road, the Nets will head to LA to play the Clippers at 10:30 PM tonight.

Knicks Still Struggling
Coming off a humiliating 120-89 defeat at the hands of the Spurs on Sunday, the Knicks came into Wednesday’s game against the Hawks ready to right the ship. A Carmelo Anthony 3-pointer midway through the first was followed by two JR Smith 3’s, giving New York a 20-14 lead. The spread held together for most of the period, sending the Knicks into the second quarter up 29-24.

Tim Hardaway Jr. started the quarter with a successful jump shot, and contributed two 3’s of his own as New York pulled ahead 44-28. Atlanta battled back, but still entered halftime down by double digits, 55-45.

The third quarter, however, was entirely lopsided in the Hawks’ favor as Al Horford and Jeff Teague led a 19-4 run which spanned most of the frame, ending with New York down 68-65.

Hardaway put the Knicks back on top with a driving layup and dunk to start the fourth, but the Hawks pulled ahead once again and remained up until Anthony scored 6 unanswered points to tie the game at 78. New York was able to build a lead and keep it this time, ultimately winning 95-91.

Anthony led the team in scoring with 25 points, followed by Andrea Bargnani who posted a double-double with 20 points and 11 rebounds. Hardaway scored 14 in his 15 minutes of play, Smith shot for 12, and Raymond Felton posted 10 with 5 assists.

Carmelo had a monster game against the Rockets the next night, but came up shy of a victory. After scoring 12 points in the first quarter, which Houston finished up 28-23, he sunk 14 more in the second (including a pair of 3’s at the end of the period) to help New York close within a point and enter halftime down 53-52.

Bargnani put New York back on top with a jump shot to start the third quarter, and the teams traded leads for the rest of the quarter—Houston led 75-72 going into the final quarter. The Rockets pulled away several times, but the Knicks battled back to tie the score on each occasion. With just 5 seconds left on the clock and Houston up 107-104, Anthony made what looked to be a game-tying 3; the play didn’t count, however, as the refs called a foul just before he made the shot and sent him to the line instead. Melo made two of three, which was not enough as Houston went on to win 109-106.

Carmelo put up 45 points and 10 rebounds in the loss. Bargnani shot for 24 and Smith scored 15 with 8 rebounds.

The Knicks will try to beat the Hawks a second time as they play again at 7:30 PM tonight.

Islanders Snap Cold Streak, Briefly
The Islanders entered Nassau Coliseum Tuesday night having lost four straight games on the road. They had trouble scoring against Nashville in the early going, but the equally road-weary Predators were no more effectual, allowing John Tavares to break a scoreless tie over fifteen minutes into the game. Pierre-Marc Bouchard doubled New York’s lead two minutes later with an assist from Frans Nielson.

Kyle Okposo slapped in the third Islander goal with a Tavares assist seven minutes into the second period, giving his team a commanding lead. The score remained 3-0 until Nashville was finally able to get on the board late in the third. Kevin Poulin blocked 32 of 33 shots as New York snapped their losing streak with a 3-1 victory.

On Thursday, the team looked poised to leave its road troubles behind and build a winning streak at home against the Kings. After a scoreless first, Casey Cizikas put the Islanders ahead with a backhanded shot 2:44 into the second, and Aaron Ness made it 2-0 in their favor just two minutes later.

That lead held for over a period’s worth of play, but Slava Voynov cut it in half 5:34 into the third period. Los Angeles tied the score on a power play not long after, and Tyler Toffoli gave the Kings a 3-2 lead in the final 90 seconds. New York could not respond in what little time remained, and took another loss.

Poulin stopped 21 of 24 shots on the night. The Islanders will finish their home stand with a game against the Red Wings at 7:00 PM tonight.

Rangers Fall to the Devils
The Rangers have recovered from a disastrous month on the road with a series of wins as they’ve spent most of November back in New York. Unfortunately the home ice did not help enough as they hosted the Devils on Tuesday.

A scoreless first period gave way to a brief New Jersey lead as Ryan Carter put the Devils ahead 6:37 into the second period. Marc Staal tied the game on a slapshot less than20 seconds later, but Carter scored a second goal in the frame’s final minute to put Jersey up 2-1.

New York was able to tie things up again thirteen minutes through the third as Dan Girardi snapped in his first goal of the season with an assist from Chris Kreider. Unfortunately, the Devils found the back of the net one more time before the end of regulation, taking a 3-2 win over the Rangers.

Henrik Lundqvist blocked 25 of 28 shots in the home loss. The Rangers will try to get back on the right track in Montreal at 7:00 PM tonight, and will host the Kings at the same time tomorrow.