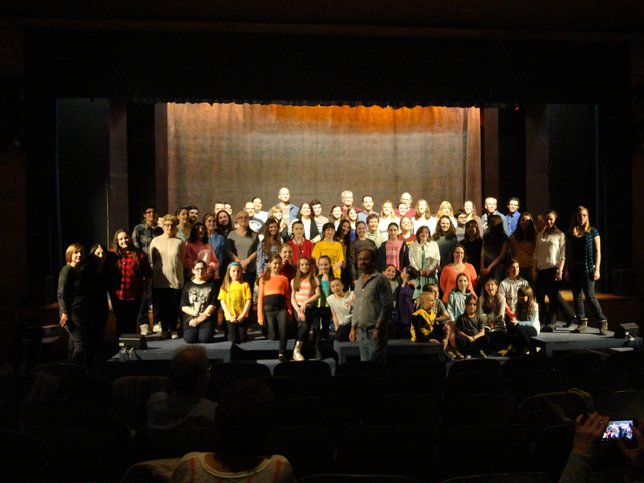 “Be careful about shouting and roughing up your vocal chords; you will pay for that.” “Don’t get too intense too soon because you leave yourself nowhere to go,” critiqued Craig Schulman as the young man cast to portray Javert in the upcoming performance of Les Miserables at the Northport – East Northport Community Theater sang and performed for him.

One by one the principal actors in the production stepped onstage to “audition” as world-renowned classical singer and Broadway performer Craig Schulman tendered admonition, instruction, practical wisdom and, along the way, humorous anecdotal stories in the morning session of a six-hour Master Class Musical Theater Workshop on April 5. In rapt attention, the remainder of the cast and crew looked on, hanging on Schulman’s every word.

No wonder. His prolific, extraordinarily successful career includes nearly 2,000 performances of Jean Valjean in Les Miserables on Broadway and worldwide. He has the distinction of being the only U.S. artist to have performed leading roles in both The Phantom of the Opera and Les Misérables. His opera and symphonic pops performances include singing Don Jose in Carmen at Opera Carolina, Opera Memphis, and in Colorado; debuting as Judge Danforth in The Crucible at Tulsa Opera and singing Eisenstein in Strauss' Die Fledermaus with Opera Memphis, among many others.

In addition, Schulman offers classical vocal and acting training to serious-minded students and is the creator and producer of Broadway Nights, a hugely-successful concert series, along with two solo programs, Heroes, Monsters & Madmen and Craig Schulman on Broadway.

“Did you read the book?” “What just preceded this scene?” “Did you study your character’s bio?” Schulman queried his protégés again and again throughout the program as he sought to drive home the importance of being thoroughly familiar with the time period in which the story occurred, the environment of each scene and the personal history of the characters they portrayed.

“Your gestures should be organic. Everything has to have a reason,” he said, making it clear that those organic gestures come from developing a thought process about their characters so they can act as those characters. But this, Schulman stressed, involves the laborious, time-consuming work of digging for details about the character’s life history, emotional state, economic status, health and a host of other factors in order to accurately and effectively interpret the role.

Shulman also worked extensively with the actors to help them develop proper vocal technique, including range, pitch, breath placement and breath management (support). He taught and demonstrated techniques such as singing dipthongs and recitatives. Dipthongs, he explained, are the sounds made by combining vowels and staying open on them as long as possible. In a recitative, he taught, singers have control over the tempo; they take more command. Rather than waiting for the piano to lead, soloists have to tell the accompanist how to play the song they are singing.

Additionally, students learned about how the human body functions during a singing performance. Because the ribcage surrounds the lungs, he said, they can’t expand much, and when breathing, the diaphragm is pulled down and pulls air in. As a result, vocalists can easily become short of air. He also explained that the soft pallet has very few muscles and the area around the neck and shoulders must remain relaxed and disengaged. If actors use their vocal chords to control the air flow, he explained, it puts a lot of wear and tear on them, causing a “cracking” sound. Raising cheekbones and smiling lifts the soft pallet and brightens the sound, he continued.

They listened, they learned and they sought to apply each lesson; but it was not until the conclusion of the “audition” portion of the program that Schulman’s protégés would experience the full breadth of his instruction through direct demonstration.  Shulman would sing for them.

Transfixed, they watched in silent awe as he metamorphosed into Jean Valjean and swept them away, enrapturing them in the scene at the barricade where he is standing over a seriously wounded Marius. The stage was set and the tortuous anguish profoundly felt before a sound was heard. Then, surging from his bowels into agonizing prayer, Schulman’s glorious, melodious voice echoed hauntingly “Bring him home, bring him home….,” he pleaded with hallowed, consuming intensity.

In the moments of silence that followed, they knew why they had come. These actors were sitting at the feet of a true master. Instruction had turned into pure inspiration. Schulman had left off teaching the “how” and had, with consuming ardor, communicated to them all the “why” they would ever need. The fruit of the commitment and sacrifice he was urging them to had been compellingly and magnificently embodied.

They knew now what risky, costly immersion looked and sounded like. More than entertain them, Schulman’s complete authenticity, involvement and bold public display of vulnerability had consumed, deeply moved and immersed them in the moment.

What followed was an engaging and entertaining question and answer period. Schulman’s answers to questions such as “What is your favorite role?” and “What was your most embarrassing moment?” were refreshingly candid and, at times, hilarious.

Schulman revealed that his favorite roles are Jean Valjean and the Phantom, adding that Phantom was much more interesting in some ways. “It takes a lot more energy to play a crazy person,” he said.

Perhaps contrary to the expectations of some of those in attendance, Schulman’s answers drove home the reality that just as in any other field, this business, too, can become routine and involve difficult relational challenges. If you’re in an original company, he said, it can be really glamorous with a party every night when the show opens. But, he continued, when you’re into the fourth or fifth year of a long-running show like Les Miserables, drudgery can set in. “At the 1837th performance, he quipped, you pray for something to go wrong.” He also recounted a time when he was badly mistreated by an associate director. “He was a miserable person to work for,” Schulman said.  But, no matter how you felt about management or how you were being treated, you could never reveal that on stage, he continued. Several times Schulman confirmed that, along the way, his dreams of champagne and limousines had often digressed to the reality of eating Wendy’s and pizza and taking the 104 bus.

The final part of the program was devoted to working with the entire ensemble. Schulman began by teaching them a simple, yet powerfully effective step to be used in the last scene of act one that makes it look as if a crowd is surging out into the audience. He went on to give several in-depth demonstrations of the use of “negative reverse energy” in scenes involving physical altercations. Schulman taught the actors how to make it look as if they were engaging in violent physical confrontations while remaining in complete control at all times.

Schulman reviewed many of scenes in the play with them; and, after offering them specific instructions and nuanced coaching, he had them demonstrate the concepts he taught. In the scene at the inn, for example, Schulman pointed out that the entire tempo should be slowed and that the crowd needed to laugh more and behave more raucously. “You’re all drunk. You’re all having a great time,” he reminded them.

With seemingly inexhaustible enthusiasm and focus, Schulman continued to deliver many more demonstrations, admonitions and instructions to the ensemble throughout the remainder of the Master Class Workshop. Whether a producer, actor, musician, crew member or third-party onlooker, Schulman’s talent, genius and abandon to the craft of acting had served to humble and inspire them, forever reorienting their relationship to the art of live theater performance.