The Knicks and Nets are now locked into the 2nd and 4th seeds; the Rangers and Islanders stand only a point apart; Kuroda and Harvey dominated their competition. 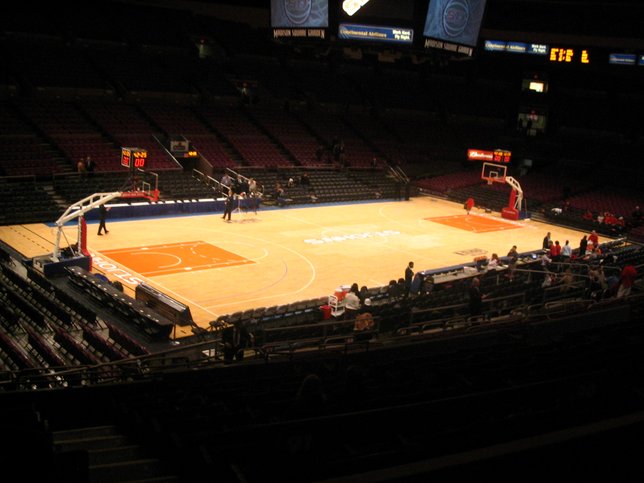 The Knicks faced their only remaining competition for the #2 seed in the NBA Eastern Conference on Sunday, and made sure to come out on top. New York got off to an early lead with a 23-15 first quarter, giving them enough cushion to stay on top of Indiana for the rest of the night.

For their part the Pacers did battle back with several rallies in subsequent quarters, but every time they came within striking distance of the lead they were put back down. The Knicks ultimately won by a ten point spread, 90-80.

Carmelo Anthony, who suffered a minor contusion to his shoulder during the game, led the team with 25 points. Chris Copeland took control of the bench, scoring 20, and JR Smith put up 15. Felton put up 11 and Shumpert scored 10.

With their spot in the playoffs locked in, the Knicks took it easy when they faced the Charlotte Bobcats last night. Only 7 players took part in the game, and they were never quite in it. Charlotte led 30-17 after the first, allowed only a slight recovery for New York in the second, and made sure to maintain their lead after halftime.  The Knicks lost 106-95.

Chris Copeland had a career and game-high 32 points, while Steve Novak sunk 17, White put up 15, and Shumpert scored 14. Prigioni was the only starter to score in single digits, though he came close to joining the rest with 9 points, and the bench (which was comprised entirely of Kidd and Wallace) combined for 8.

The Knicks have one more regular season game against Atlanta at 8:00 PM tomorrow before starting the playoffs against Boston on Saturday.

While the Knicks did their part to help knock the Pacers down a peg on Sunday, the Nets could not take advantage to move one game closer to the #3 seed. Already down by 4 following the first quarter, Brooklyn had an absolutely atrocious second, entering halftime down 51-32.

The Nets did their best to grasp victory from the jaws of defeat, going so far as to come back within 2 points with under 5 minutes left in the game, but Toronto held on just long enough to play spoiler. Brooklyn lost 93-87, making their playoff position as the #4 seed final.

With no chance of moving up in the rankings, the Nets rested Lopez and Evans when they played the Wizards last night. They trailed for the first 43 minutes, but rallied late in the fourth quarter to take a 106-101 win.

Humphries and Blatche, who both got the start, led the team with 20 points. Taylor and Teletovic both had 14, Brooks shot for 12, and Shengelia and Watson both scored 11.

The Nets will finish out the regular season against the Pistons at 8:00 PM tomorrow.

As Go Their Starters, So Go the Yankees

CC Sabathia improved to 2-1 on the season when the Yankees played their first game against the Orioles, but Phil Hughes would not prove so impressive in Game 2 of the series.

Having already allowed a run in the 1st, Hughes gave up a homer in the 2nd and another in the 3rd, followed by yet another run in the same inning. Shortly after Hughes allowed his third homerun and fifth run overall open the 4th he was taken out of the game in favor of David Phelps.

The bullpen did its job well. Phelps carried the game into the 8th when he was replaced by Joba Chamberlain, who in turn handed the ball over to David Robertson in the 9th. None of them allowed a run to score, however they did not receive the support necessary to make their efforts count toward a win. Hafner had homered back in the 2nd and Overbay singled in Cervelli, but the only other run the team could muster was a homer from Vernon Wells in the 6th. They lost 5-3.

The Yanks’ offense did not improve in the series’ final game on Sunday, but they ultimately did not need it to. While Phil Hughes gave an abysmal performance on Saturday, Hiroki Kuroda was absolutely masterful throughout the rubber game. A sac-fly from Jayson Nix to bring in Boesch and 2-run homer from Brett Gardner in the 5th inning would be all the run support Kuroda needed, as he pitched a complete-game shutout. New York won 3-0.

Ivan Nova (0-1) is slated to start tonight’s game against the Diamondbacks at 7:05 PM. New York is again over .500, standing 1.5 games back of the Red Sox for first place in in the American League East.

After an offensive explosion kicked off the first of two games with the Twins, the Mets turned to defense to sweep the short series.

Matt Harvey carried a no-hitter into the 7th inning before giving up a homer to Justin Morneau, but he got through the inning with no further damage and finished out the 8th as well. Parnell was brought in to replace Harvey in the 9th and gave up a run on two doubles by Joe Mauer and Josh Willingham, but finished the inning and the game.

The two runs in the 7th and 9th were not enough for Minnesota to save themselves from defeat. Marlon Byrd had kicked off a fateful 5th with a homerun earlier in the day; he was followed by a trio of RBI singles off the bats of Collin Cowgill, Daniel Murphy, and David Wright.

The Mets won 4-2, Harvey got his third win of the season, and Parnell picked up his first save. The team will play a double-header today to start a 4 game series with the Rockies. Game 1 will take place at 3:10 PM and Game 2 is slated for 8:40 PM.

The season’s final meeting between the Islanders and the Rangers was a defensive struggle throughout the entire night. Both teams battled back and forth, unable to penetrate the other’s goal throughout regulation and forcing the game to enter overtime scoreless.

3:11 into OT, Dan Girardi found the back of the net for only the second time this season, giving the Rangers the win. Lundqvist stopped all 29 shots he saw throughout the night, and Nabokov blocked 19 of 20.

No seeding was altered by the outcome of the bout—the Islanders remain in the 7th seed of the NHL East while the Rangers are still in 8th place—but New York’s teams are now separated by only a single point.