Get the luck of the Irish with New York City’s Annual St. Patrick’s Day Parade! 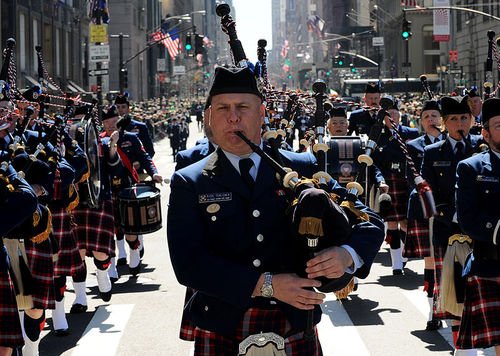 On Monday, March 17th, millions of people will crowd the streets of New York City in celebration of St. Patrick’s Day, while millions of Americans will celebrate from the comfort of their own home or at work as they tune in to watch - the parade will be broadcast live on NBC.

Beginning at 11 AM sharp, the Parade starts at 44th Street and will make its way up Fifth Avenue past Saint Patrick’s Cathedral at 50th Street and go all the way up to 79th Street where the parade will finish anywhere around 4:30 PM or 5:00 PM.

The first St. Patrick’s Day march was held in 1972 and has become one of the oldest and greatest traditions in the Big Apple. It was originally held in Lower Manhattan before the Saint Patrick’s Cathedral was built on Fifth Avenue. A group of former Irish patriots and Irish military who served in the British Army stationed in the American colonies were getting homesick. They wore the color green as a sign of Irish pride, sang Irish songs and played the pipes to Irish tunes. Eventually, these grew to be the customs of the Parade. Unlike most other parades held in the city streets, this one has stayed true to its roots by not allowing floats or any other type of commercial influence unlike the Macy’s Thanksgiving Day Parade which has become highly commercialized.

Every year, the St. Patrick’s Day Parade averages 150,000 to 200,000 marchers along with bagpipers, great bands and even high school bands who are all escorted by a unit of soldiers. In 2002, the Parade Committee dedicated the parade to the heroes of 9/11. Midday, the entire parade paused for two minutes and turned south towards where the Twin Towers stood. On that day, there were an estimated 300,000 marchers and three million spectators lining Fifth Avenue making it the largest parade to date.

Getting to and from NYC can be a hassle any day of the week but the MTA is offering additional services on their transit system to accommodate for travel as the days come closer and closer to St. Patrick’s Day. The MTA will be scheduling 14 extra trains - six AM westbound and eight PM eastbound - on Monday, March 17th, 2014.

While the city may not be everyone’s favorite cup of tea, many towns across Long Island will be hosting more close to home St. Patrick’s Day Parades on the Island.

Whatever you decide to do this St. Patty’s Day, things can get a little crazy. Check out some of these tips that will help you have fun but also stay safe this holiday:


From all of us here at LongIsland.com - Happy Saint Patrick’s Day!

Have any exciting plans for this year’s St. Patrick’s Day?
Tell us in the comments below!