Celebrate your Irish heritage by taking a trip to New York City to enjoy the Annual St. Patrick’s Day Parade! 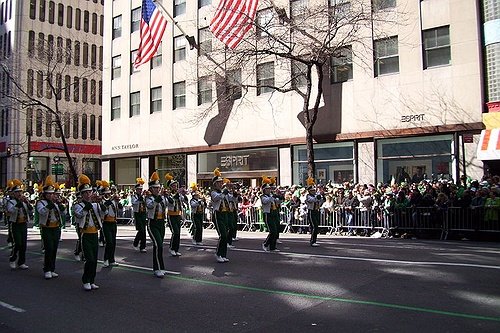 The 254th Annual St. Patrick’s Day Parade in New York City is one of the most popular locations for residents to celebrate the Irish holiday. Millions from the surrounding areas will make their way into the city on Tuesday, March 17th to enjoy the day with family and friends at the entertaining parade. The parade will begin at 11:00 AM and can be viewed on 5th Avenue between 44th Street and 79th Street.
Those who are interested in avoiding the crowd and celebrating this tradition at home can watch the parade live on television! Tune in to NBC channel 4 and enjoy from the comfort of your own home.
The New York City St. Patrick’s Day Parade is one of the largest and oldest traditions celebrated in New York. The first St. Patrick’s Day Parade was held back in 1762 and had initially taken place in Lower Manhattan before the Saint Patrick’s Cathedral was built on Fifth Avenue. Former Irish Military and Irish patriots who served in the British Army were stationed in America and had become homesick. They wanted to show off their Irish pride by wearing the color green, singing Irish songs and playing bagpipes. After some time, these activities became part of the annual parade ritual. Lots of other parades became commercialized as the years went by, but not this one! The St. Patrick’s Day Parade has stuck to its old roots and has not allowed any floats or other types of commercial influences to participate.
Each year, the parade brings in between 150,000 to 200,000 marchers along with bagpipers, bands and even some high school bands who are escorted by a unit of soldiers. In 2002, after the tragedy of 9/11, the Parade Committee dedicated the celebration to all the heroes. In the middle of the parade, everyone paused for two minutes, while facing south towards where the Twin Towers once stood. There were about 300,000 marchers that day along with three million viewers that filled Fifth Avenue, this made it the largest parade to date.
While planning your trip to New York City for this annual parade, be sure to check out the additional services the MTA will be providing to accommodate the large amount of people travelling into the city. If you rather celebrate on the island, there are plenty of great parades going on all throughout the month of March, along with other fun events that the entire family can enjoy.
Whichever location you decide, be sure to keep safe while celebrating! Things can get a bit hectic during the St. Patrick’s Day activities so take a look at these tips that will help you stay safe while having fun:

Stay With your Group
Most like to travel with a ton of people to celebrate this huge holiday, so be sure to stick with your group at all times. The overly crowded streets can make it difficult to stay with those you came with, so keep an eye out and come up with a meeting spot in case you get separated.
Travel Light
You will be walking around a lot so try not to bring too much with you. Only bring what you need so you have nothing weighing you down as you make your way through the crowds. This will make everything much less of a hassle!

Dress Accordingly
Check the weather before you head into the city so you know exactly what to wear. Be sure to bundle up for the brisk winter weather. If you’re too cold, it may be more difficult to enjoy yourself! Bring some extra pairs of gloves and a scarf or two for any friends that forget to bring their own.

Be Prepared
Along with dressing for the weather, make sure to bring your cell phone that is fully charged and its charger. Sometimes you can find places that allow you to charge your phone and you can even charge it in some spots on the train. This will also come in handy if you get separated from your group.

Wear Green!
One of the many great things about St. Patrick’s Day is dressing the part! So show your Irish pride by wearing lots of green! Parade goers also like to be festive by wearing hats, beaded necklaces, stickers and pins that support their heritage.
From all of us here at LongIsland.com - Happy Saint Patrick’s Day!
Have any exciting plans for this year’s St. Patrick’s Day?
Share with us by commenting below!
[Source: NYC St. Patrick's Day Parade]
Photo by MuZemike, via WikiCommons (CC BY-SA 3.0).