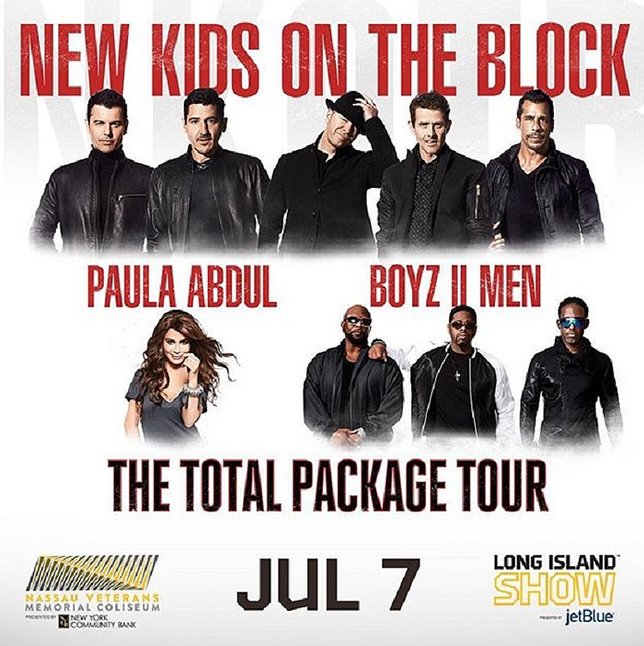 Tickets to the shows are on sale now and can be purchased at www.ticketmaster.com and the venue’s websites, or by calling 800-745-3000.

Produced by Live Nation, The Total Package Tour is a follow-up to 2013’s hugely-successful Package Tour, and is the NKOTB’s biggest lineup yet.  In the pop icon’s first tour in 25 years, Paula Abdul will make her momentous return to the stage for a hit-fueled set that includes an incredible 7 number-one hit singles, while Package Tour alums Boyz II Men will deliver their trademark, multiplatinum-selling sound to fans nationwide.

“Our fans know we love to bring them a party, and this tour is no exception.” says NKOTB member Donnie Wahlberg.  “It’s not just a show, it’s an experience.  Paula Abdul is such a pop icon and Boyz II Men are one of the best R&B acts of all time.  It’s going to be a night of hit after hit, and we can’t wait to deliver the ‘Total Package’ to our fans!”

With a combined 200 million records sold worldwide, NKOTB, Paula Abdul and Boyz II Men are primed to have the biggest party of the summer with The Total Package Tour. Known for delivering Blockheads with one-night-only experiences and legendary collaborative events, NKOTB will return to the stage after 2016’s touring hiatus, bringing with them number one hits like “Hangin Tough,” “I’ll Be Loving You (Forever),” and “Step By Step”.  The iconic Paula Abdul will perform her legendary catalogue of pop hits, while Boyz II Men will make their second trek alongside NKOTB to perform the rich catalogue of hits that earned the trio the distinction of being the best-selling R&B group of all time.

BROOKLYN SHOW™ presented by Steve Madden and LONG ISLAND SHOW™ are the concert and major event programming franchises of Barclays Center and The New Coliseum, respectively.