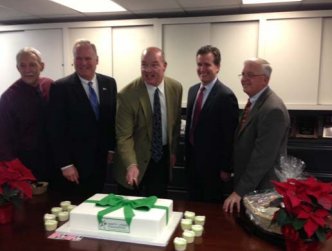 Commack, NY - December 13, 2013 - The Marty Lyons Foundation held a ribbon cutting ceremony to celebrate the Grand Opening of their new national headquarters. The Foundation, established in 1982, is a not-for-profit organization dedicated to providing wishes for children diagnosed as having terminal or life-threatening illnesses. MLF is unique in that it will consider granting a second wish to a deserving child.

The office, located at 345 Veterans Memorial Highway in Commack, houses three staff members who are responsible for coordinating the organization’s program, which has ten Chapters serving thirteen states. The Foundation was originally founded in Uniondale before moving to Manhattan.

“Long Island is where the Foundation started and it feels good to be back.  We have a new facility, a new staff and are prepared to move forward and continue to grant more wishes than ever before. The Foundation’s success is based on our staff, Board members, volunteers and the corporate community that supports our efforts in granting wishes for children and helping their families during difficult times,” said Lyons.

Since its inception, The Marty Lyons Foundation, a 501(c)3 nonprofit organization, has granted more than 6,500 special wishes to children between the ages three and 17 who who have been diagnosed as having a terminal or life threatening illness.

For information about The Marty Lyons Foundation, please contact 631-543-9474 or visit martylyonsfoundation.org.