Curran: "Years of Inaction by County Officials has led to Millions in Tax Inequity and big profits for tax firms." 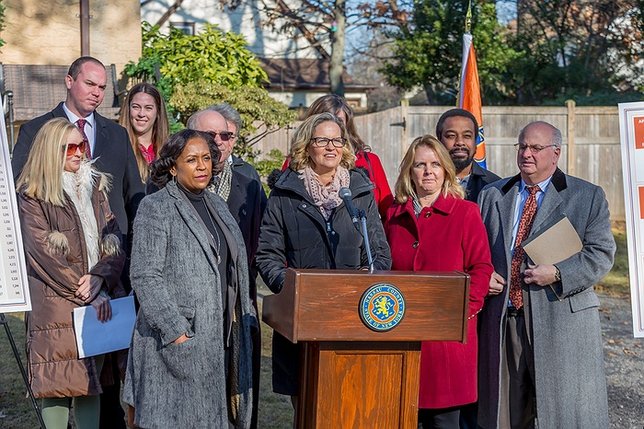 Baldwin, NY - December 12, 2018 - Nassau County Executive Laura Curran today stood with Nassau County Assessor David Moog, Legislator Debra Mule and property owners, including Julie Buske of Baldwin, Chandra Ortiz of Baldwin, Allen Foley of Hicksville, Matt Meng of East Norwich, Karen Higgins of Massapequa Park, Erin Guida of Hicksville, Garris Williams of Baldwin, and Jeff Gold of Bellmore, and called on the Republican Majority to join her in reforming the property assessment system and to stop protecting tax firms that have made millions because of the Mangano frozen assessment roll. The group of taxpayers applauded County Executive Curran’s plan to fix the assessment roll.
“Let me be clear to each and every taxpayer. I understand your anger. The Mangano Administration, the GOP Majority in the Legislature and tax grievance firms perfected a system that kept tax burdens unfair, and made select tax grievance firms very rich. You don’t need to hire grievance firms to make sure that you are receiving fair and accurate assessments,” said Curran. “I am changing a corrupted assessment system that was created and maintained by a corrupt administration.”
Taxpayers protested the frozen roll which lead to shifted tax burdens and higher school tax rates:
Curran: “Your Property Values are Accurate”
Along with David Moog, County Assessor, County Executive Laura Curran assured property owners that the county’s 2020/21 assessment roll is fair and accurate for all taxpayers and not just those that grieve.
The residents who joined her have seen both increases and decreases in their taxes due to their new property values.
“We did the job that Mangano and the Republicans were afraid to do,” said Curran. “We reassessed property in Nassau County, and the good news is property is worth more than it was 8 years ago.  If you think your market value is wrong, you still have the right to grieve but you don’t need a tax grievance firm anymore to get the correct level of assessment.  Don’t pay a fee when you don’t need to.  We won’t be doing mass settlements anymore.”
“For too long, many Nassau County residents have paid more than their fair share of taxes,” said Legislator Debra Mule. “That is why I support the County Executive’s Taxpayer Protection Plan and the administration’s ongoing efforts to make our broken assessment system fair and accurate again. I urge any taxpayer that has concerns about their assessment to take advantage of the additional satellite offices and other important resources being made available during this process.”
“During my campaign I promised to fix the broken assessment system and I am holding firm on that promise,” said Curran. “I have a Taxpayer Protection Plan that will phase-in the tax impact over at least five years.  We want to ease the strain on property owners while protecting the County from an ongoing financial mess.”