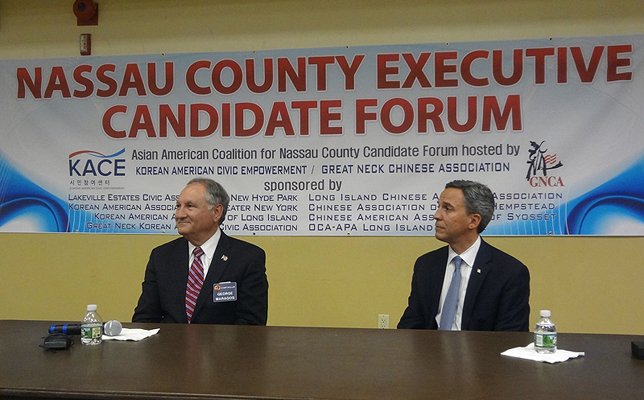 New Hyde Park, NY - August 25, 2017 - On August 25, the Clinton G. Martin Park Recreation Center in New Hyde Park was host to what a was publicized as a bipartisan public forum between two candidates vying for the office of Nassau County Executive this November- current Nassau County Comptroller George Maragos and former NYS Senator Jack Martins. Seated in a room filled with civic-minded local residents, Maragos and Martins fielded question ranging from immigration to the economy and job market in Nassau County while remaining respectful and cordial to each other; an obvious – and some would say refreshing – change of pace from how cutthroat and nasty the political arena has become as of late.

George Maragos – a former Republican who is now running as a Democrat – has been serving as Nassau County Comptroller since first elected to the post in 2010; before his current bid for the County Executive position, he twice ran unsuccessfully for the United States Senate in 2010 and 2012. Jack Martins, his Republican opponent, was a New York State Senator representing the 7th District from 2010 to 2016; he later ran for the NY 3rd District Congressional seat but lost to current representative Thomas Suozzi. 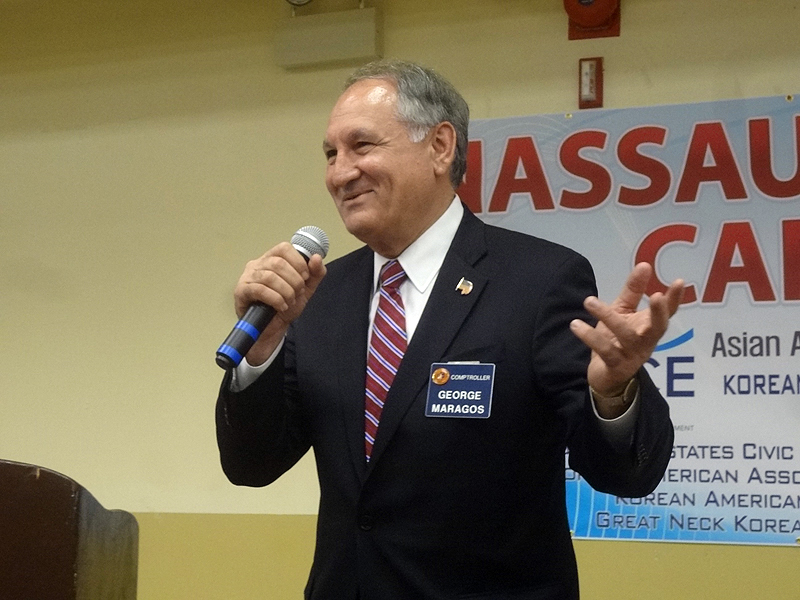 The current Nassau County Executive, Edward Mangano, is currently embroiled in controversy; indicted on federal corruption charges in October of 2016 with a trial date set for early 2018, Mangano rallied against his own Republican party when they called for him to step down from his office following his highly-publicized arrest. However, it appears that Mangano has decided against running for re-election this November, as the deadlines for registering as a candidate as either a Republican or Independent have passed without any action on Mangano’s part, suggesting that he plans to concentrate solely on his trial instead of politics.

This, of course, means that it’s open season for the office of Nassau County Executive, and the two primary candidates – Maragos and Martins – devoted an entire evening this week in New Hyde Park to hear the concerns of their prospective constituents and, in turn, address them. The public Q&A forum consisted of both candidates taking questions from local civic leaders on numerous topics, the first of which concerned the amount of support the winner of November’s election would be willing to give to Nassau County’s ever-growing immigrant population. 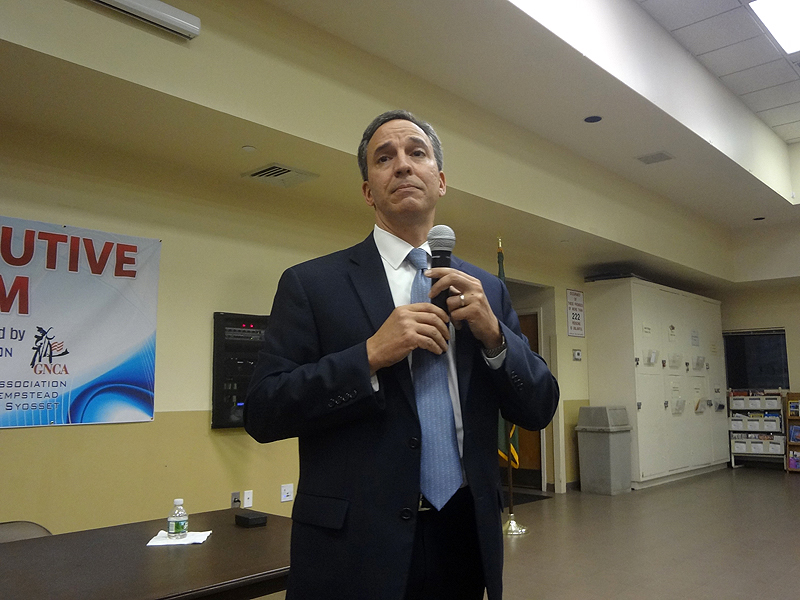 Maragos, himself an immigrant from Greece, noted that minorities are not represented enough in local government and law enforcement, and made it clear that he would like to open up more opportunities for these groups in that regard.

“In Nassau County, our minority and ethnic communities have grown very rapidly and now represent over 40% of our population,” Maragos said. “However, there currently aren't any Asian representatives in the Nassau County Legislature, the number of business opportunities that go to minorities is less than 10%, and there are probably less than 5% of minorities in the police department. We need to devote more spending of money to support minority-owned businesses, and we need to ensure that all County documentation is available in a variety of languages that reflect our community, just as New York City is doing.” 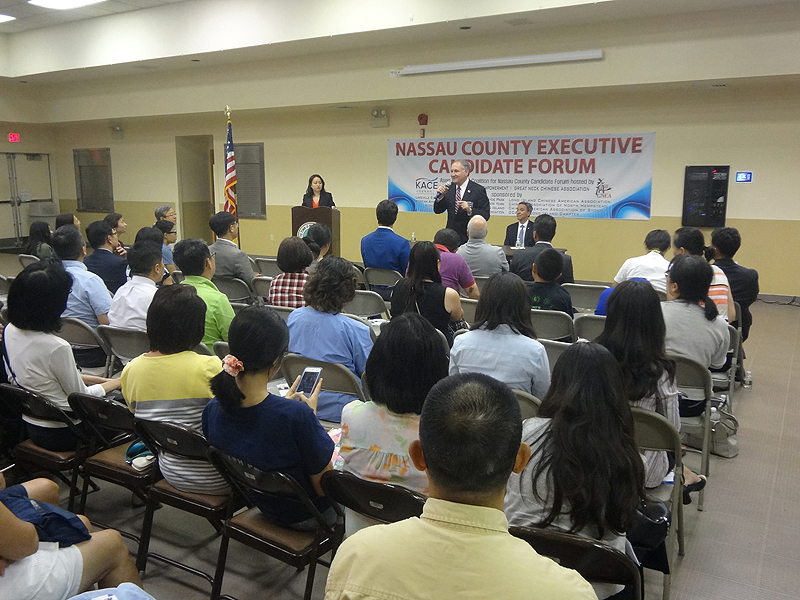 Martins echoed the sentiments of Maragos, and said that hiring in his Administration wouldn’t be dependent on satisfying quotas, but on acquiring the very best talent, regardless of their race, creed, or color.

“We’re going to encourage everyone who has the highest qualifications to participate and place their applications, and we will consider people based solely on their merits,” Martins said. “We will make sure we don't exclude people because we live in a society of opportunity...we won't exclude people based on race, color, ethnic background... you will all get an equal opportunity.”

Many residents at the forum have expressed that they – or their loved ones – are living in constant fear of harassment and deportation with the recent crackdown on illegal immigrants by U.S. Immigration and Customs Enforcement (ICE) officials, and Martins made it clear that those who want to contribute to Nassau County in a positive manner should have nothing to fear; however, lawbreakers who are here illegally had best watch out. 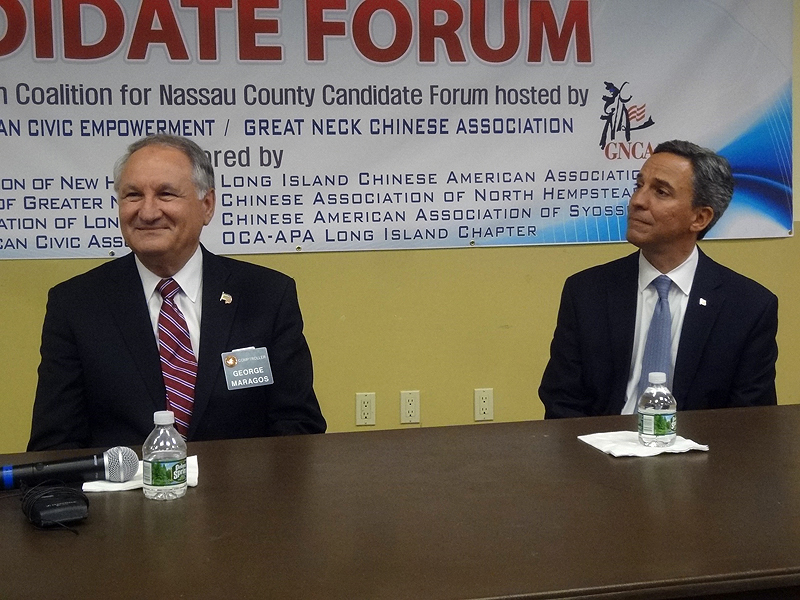 “There should never be mass deportation raids and people being asked to leave the leave the country. That is not what any of us wants,” he said. “I believe there should be a path for people who are here undocumented to achieve a status in this country so they don't have to live in fear of being deported. However, where I draw the line is with violent felons…if someone is convicted of breaking the laws of our country, and they're here illegally, when they get out of jail I want them deported. I do not want to let them back into our community.”

A proponent for immigrant rights, Maragos noted that, if elected, he would want Nassau County to be a safe place for those who have journeyed to our country with the best of intentions, and that he would fight to make sure their rights are always protected. 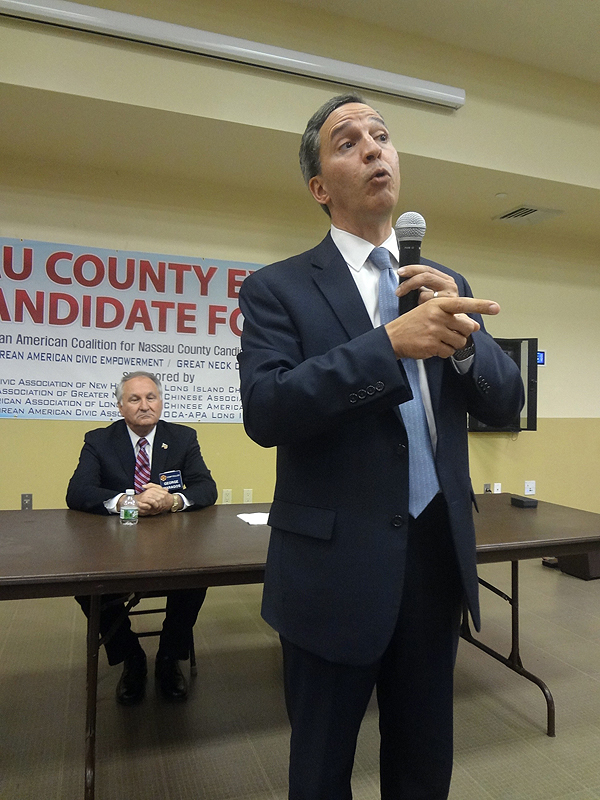 “America is built by immigrants, and should always be welcoming to immigrants and accommodating...we should not be using police tactics to enforce and deport people,” he said. “We will have a welcoming and friendly immigration policy that will guarantee due process rights to every individual, and any administrative warrants that are issued will be subject to administrative review by a judge before we honor any request by U.S. Immigration and Customs Enforcement officials.”

The main concern of many residents at the forum that evening was the current state of Nassau County’s economy and job market; with many young people leaving to find greater opportunities and a cheaper cost of living elsewhere after graduating college, Long Island’s future economic prospects have been looking bleak as a result. Martins addressed this issue by proclaiming that the situation needs to be examined, dissected, and tackled head-on in order to re-build Nassau into a land of opportunity that will attract young people once again.

“The challenge of this race for Nassau County Executive is that we have to get our house in order. We have to look at economic development...what is it that we want to do? How do we create a job base that will allow our children, after they leave school, to come back home and work here?” he said. “Medicine and research is something that we do well, but what we don't do well is allow for regional development...we need to get our economic house in order, and then we could start recruiting companies that will become the backbone of the next generation economy.” 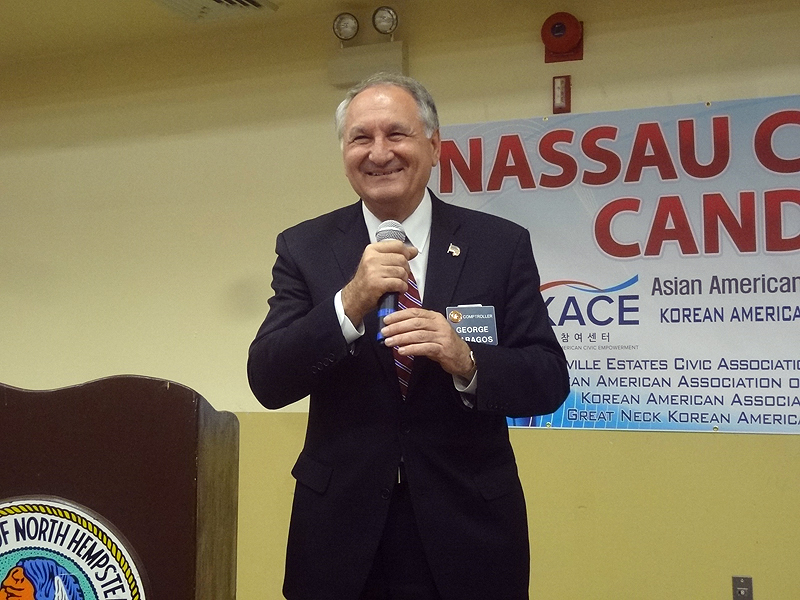 Maragos, already familiar with the world of finance as Nassau County Comptroller for almost eight years, said that Nassau needs to build upon its strengths and – most importantly – address its weaknesses if it’s to ever become an economic heavy-hitter once again.

“Nassau County's population is aging, it's grown more diverse, and many of our young people are going away to college and never coming back because we are not creating exciting, high-paying opportunities for them and the cost of living is becoming unaffordable,” he said. “If Nassau County is going to compete in today's global economy, we have to focus on industry segments – such as medicine and biotech – that will become world leaders in their fields, and that will create high paying jobs. Second, we need to fix our transportation system and aging infrastructure, which is failing. If we offer a clean, safe and reliable train ride into the city, you will see companies flock out here.”