From Tuesday morning into Tuesday evening Long Island will be on flood watch, high wind watch and under a coastal advisory. 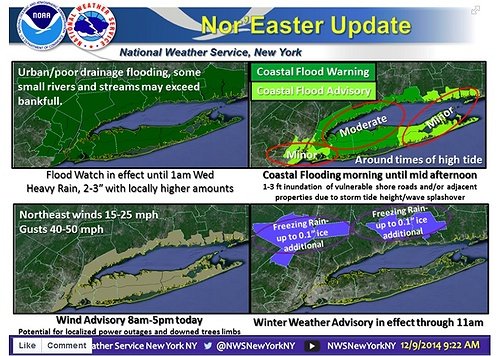 Update - December 9, 2014 - A flood advisory has been issued for Southeast New York, Nassau and Suffolk Counties until 1PM. According to the National Weather Service's service doppler radar, rain will be falling at approximately a quarter of an inch per hour, at times possibly up to half an inch of rain per hour. Low lying spots, streets, highways, underpasses as well as other drainage areas may experience substantial flooding.

Avoid driving in areas where the roadway is covered in water, or seek out a different route. People living in the coastal areas of Long Island should also avoid shore roads which may experience coastal flooding due to storm tide height and wave splashover.

Original - The National Weather Service has issued a flood watch for Northeastern Suffolk, Northern Nassau, Northwestern Suffolk, Southeastern Suffolk, Southern Nassau and Southwestern Suffolk from Tuesday morning through late Tuesday night. The rain will be heavy at times, with the potential of reaching 2 to 3 inches by the end of the evening on Tuesday. Minor to moderate coastal flooding is the current outlook for areas along the South Shore. Beach erosion will also be significant with large Southeast swells of 6 to 8 feet breaking on the Atlantic Ocean side of Long Island. Locations bordering Western Long Island and low areas along the shore be prepared for additional flooding from onshore winds and high tide cycles.

Residents living in areas of Long Island that are considered flood zones should monitor these conditions as they unfold and have an evacuation plan ready if necessary.

On Tuesday, the Nor’easter will also bring with it potentially damaging winds. Northeast winds are looking to hit 25 to 35 MPH with gusts 55 to 60 MPH. The strongest winds will occur on Tuesday from late morning into the early afternoon. Be aware that winds of this caliber can cause power outages, downed trees and minor property damage.

To get the latest traffic & road conditions, visit the LongIsland.com Traffic Center, and be sure to check out the live traffic feeds on our Traffic Cam Page.