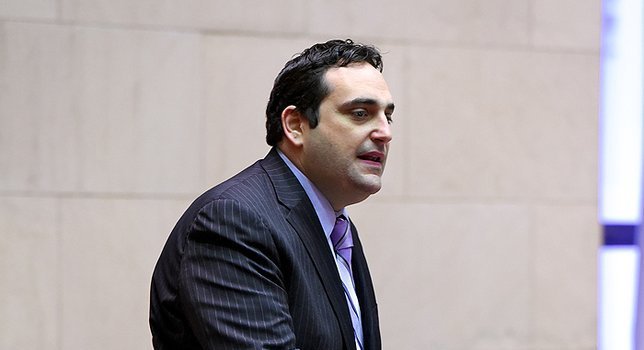 Huntington, NY - December 5, 2018 - Town of Huntington Supervisor Chad Lupinacci was named as the defendant in a lawsuit filed in Suffolk County Supreme Court on Tuesday by an ex-aide that accused him of allegedly attempting to sexually assault him in 2017, charges that Lupinacci has vigorously denied.
Brian Finnegan, 26, alleges that Lupinacci – at the time still a Republican Assemblyman who had been elected to serve as Huntington Supervisor –  molested him while the two shared a hotel room in Albany, New York. Finnegan, a political aide at the time, claims that he accompanied Lupinacci upstate to assist the then-Assemblyman in clearing out his office as he prepared to leave his post to take up his new position in Huntington.
Finnegan, who says that Lupinacci, 39, insisted that the two share a room at the Renaissance Hotel due to budgetary constraints, claims that once the two had gone to bed, Finnegan was awoken at 2:30 a.m. by Lupinacci, who had knelt next to his bed, pulled down his boxer shorts, and began touching him, according to the lawsuit. Lupinacci allegedly attempt to touch Finnegan a second time about ten minutes later; it was at this time that Finnegan said that he became upset due to the unwanted physical contact and exited the room.
At a press conference held Tuesday afternoon in Huntington, Finnegan described the events that he claimed took place between him and Lupinacci in the Albany hotel room on the evening in question.
“In December of 2017, Huntington Town Supervisor, my then-boss in the New York State Assembly, sexually assaulted me,” he said. “This predator was able to take advantage of me and perform forcible, non-consensual, and unwanted sexual acts on me in the middle of the night while I was sleeping.”
Finnegan also asserted that he had been verbally abused by Lupinacci for years, but that the alleged attack was the last straw; he resigned his post afterwards and even went so far as to turn down a job as an Executive Assistant and Senior Advisor to Lupinacci in his capacity as Huntington Town Supervisor, a position that he said that he had previously wanted very much.
“At the drop of a hat, all of my hard work was meaningless, all because I was the target of a sexual predator,” Finnegan said.
Arthur Aidala, Finnegan's attorney, noted that his client refrained from pressing criminal charges against Lupinacci and attempted to work the matter out privately beforehand.
“We were hoping this wouldn't come to this. It's no secret, we're not running from this,” he said. “We tried to work this out with him, with his attorneys. We tried to have him come to the table and say that he’s sorry, that he’s suffering from something and needs to get help.”
Finnegan is seeking back pay and unspecified damages on charges including assault, intentional infliction of emotional distress, and more.
A statement released by Lupinacci's personal attorney, Brian Griffin, called the accusations “unequivocally false and completely without merit, and an attempt at an unjust and unwarranted financial payday.” The statement also noted that Lupinacci will remain at his job as Huntington Town Supervisor and that he fully intends to fight the accusations.