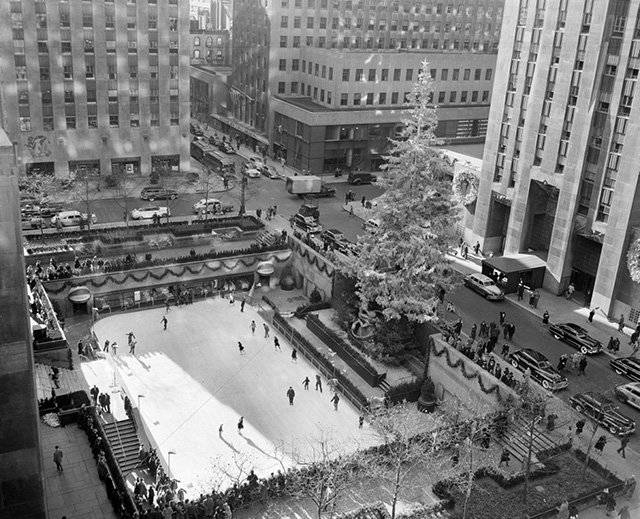 Photo: Courtesy of the Yaphank Historical Society. Used with permission.

Think of the most over the top Christmas Tree display and plunk that down in the middle of Manhattan during the holidays. That’s what the organizers did with a 75-foot Norway spruce tree donated to Rockefeller Center by Yaphank’s Charles Everett Walters in 1949.

According to an article by the Yaphank Historical Society that was shared with longIsland.com, the tree was “covered with hundreds of gallons of silvery-white paint to indicate a snow-covered look before it was cut down.” They also noted that “five hundred plastic globes in blue, yellow, orange, orchid, and red adorned the tree and were reflected by the silver branches during the day. 7,500 green, yellow, orange, blue, and red lights lit up the tree at night. This tree was a dazzling sight, both day and night. Rockefeller Center added to this dazzling display by decorating the promenade leading to the tree with 576 rapidly whirling illuminated giant snowflakes.”

Apparently, the display was made so merry and bright that year for visitors - who had to endure the austerity of WWII when the Rockefeller Center tree was decorated very plainly with no electric lights - that it caused a crazy traffic jam on 5th Avenue that year.

The tree was featured in the November 29, 1949 issue of the New York Times with the headline, “7,500 Bulbs at Night, ‘Icy’ Coat by Day, Light the Rockefeller Center Christmas Tree.” A story about the tree was also published in Life Magazine.

This was not the first or only tree from Long Island that made it to the big game. The official Rockefeller Center website shows a 50-foot tall tree that came from Huntington during World War II, when the tree went unlit due to black-out regulations. In 1951, an 82-foot tall came from Lake Ronkonkoma.