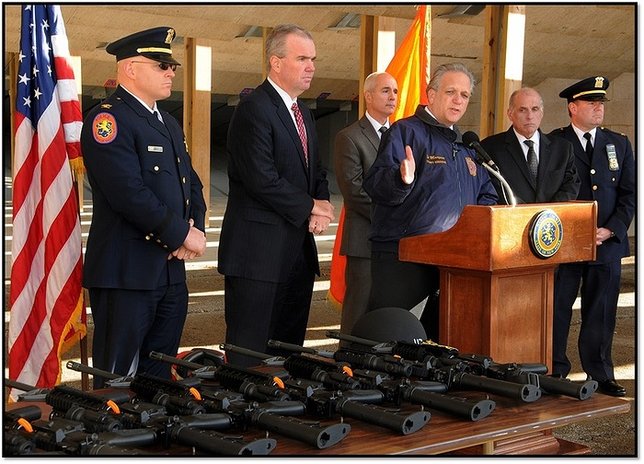 New rifles and training to enhance rifle skills will help Nassau County law enforcement officers prepare for active shooter or act of terrorism situation should it occur in Nassau County.

Nassau County, NY - December 3, 2015 - Nassau County Executive Edward P. Mangano and Acting Police Commissioner Thomas Krumpter announced today that the Nassau County Police Department (NCPD) has purchased new rifles and is training law enforcement officers with enhanced rifle skills in preparation for an active shooter or act of terrorism, similar to what we have seen in recent events, should one occur in Nassau County.

Currently, the NCPD’s Bureau of Special of Operations and the Emergency Services Unit are armed with rifles. Today’s announcement will also supply training and rifles to the Special Investigations Squad, CIRT, Robbery Squad, Electronics and approximately 100 members of patrol throughout the County - an important initiative as patrol officers are often the first responders to the scene of a crime.

County Executive Mangano stated, “While we hope the day never comes, the Nassau County Police Department is continually training and preparing officers to combat active shooters and acts of terror. To enhance response capabilities, additional Nassau County Police Officers are being trained and outfitted with powerful rifles that are capable of hitting their targets from long range distances."

“The Nassau County Police Department prides itself on having some of the most well respected and professional law enforcement officers,” said Acting Police Commissioner Thomas Krumpter. “To that end, it is imperative that we continue to provide them with the tools and training they need to help keep Nassau one of the safest counties in the nation. Sadly, we realize that acts of terror and active shooters are a reality but residents should rest assure that our Asset Forfeiture Intelligence Unit works around the clock to monitor any possible threats, our officers are continually training and we are providing them with the resources and technology needed.”