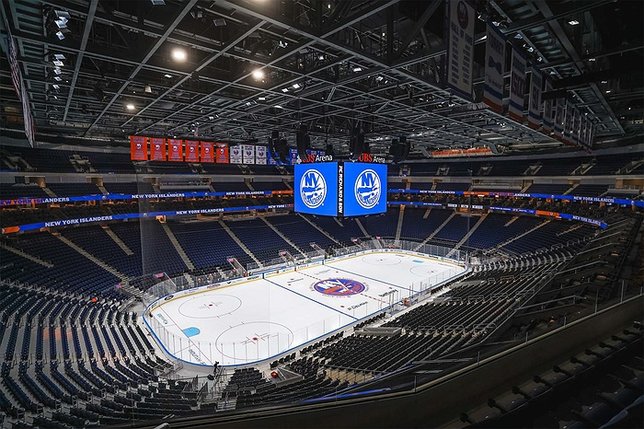 UBS Arena, which will bring the New York Islanders back home to Long Island.

Governor Kathy Hochul has announced the opening of UBS Arena, which will bring the New York Islanders back home to Long Island. The new arena marks a major milestone in the overall $1.3 billion Belmont Park Redevelopment Project, which is transforming 43 acres of underutilized parking lots into a premier sports and hospitality destination. In addition to being the new home for the New York Islanders hockey team, the UBS Arena will feature concerts, live entertainment and other events throughout the year. Future phases of the Belmont Park Redevelopment Project will include a 350,000 square-foot destination entertainment and retail complex, a 250-key hotel and a community center. In addition, two rehabilitated local parks will reopen to the public in the coming months. Construction of all the project components is expected to create 10,000 jobs and generate $2.7 billion in economic activity for Nassau County.
"Today is a monumental day for New York and the Islanders as we cut the ribbon on the world-class new UBS Arena," Governor Hochul said. "This is the first step in the newly redeveloped Belmont Park, which will serve as an internationally recognized destination for sports, entertainment, retail and hospitality. As New York continues to recover from the COVID pandemic, Belmont Park will be instrumental in strengthening the regional economy and boosting tourism for generations to come."
Lieutenant Governor Brian Benjamin said, "The opening of the new UBS Arena is not only great for the Islanders, the new renovations to Belmont Park will be a wonderful addition to the Nassau County community. This new project will bring entertainment and economic activity to the area and make it an international hub for everything from sports to hospitality, I cannot wait to see the new arena in action."
Announced in December 2017, the Belmont Park Redevelopment Project includes significant community and public realm benefits, including a new Long Island Rail Road station in Elmont - the first new full-time LIRR stop in nearly 50 years. By 2024, the project is expected to sustain 3,200 new full-time jobs, produce $858 million in annual economic activity, and generate tens of millions of dollars in new annual tax revenue for the regional economy.