24 Teams From Across Long Island Participated In One Of The Tri-State’s Largest Robotics Competitions. 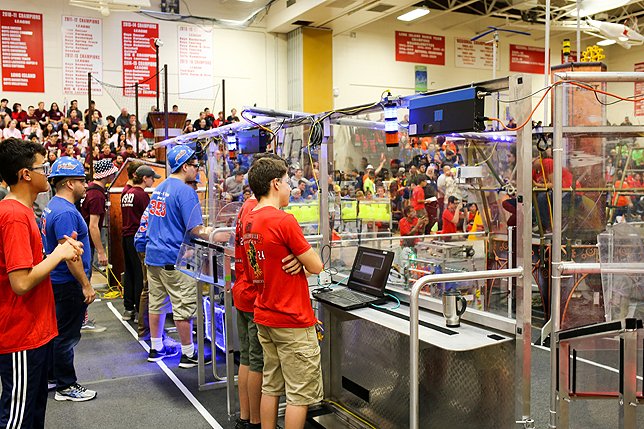 Dix Hills, NY - November 21, 2017 - On Saturday, November 18, the Half Hollow Hills FRC Robotics Team 3624 hosted its sixth Annual Robotics Invitational competition at Half Hollow Hills High School West, where 24 teams from schools across Long Island participated in one of the tri-state area’s largest robotics competitions. The event engaged many of Long Island’s future science and technology leaders and innovators to build their STEM skills in a fun and exciting contest.
This invitational friendly competition featured a challenge called FIRST STEAMworks, which was a replay of last year’s international high school robotics competition. Two alliances of three individual teams from different schools and their robots compete on a field to score points to win the game. The game has a steampunk theme and teams score points by shooting whiffle balls which represent fuel into a simulated boiler which transfers the generated steam into an airship in the middle of the field. They can also register points by directing the robots to pick-up and deliver gears to the airships to engage their rotors, and have the robots climb onto the airship for take-off before the time runs out.
“It is so fun to be part of an enjoyable and engaging learning environment that enhances problem-solving skills, cooperation and teamwork,” said Gianna Vessey, a member of the Half Hollow Hills Thundercolts robotics team. “This competition helps us showcase the rapidly growing area of STEM education and the benefits of robotics programs to students, schools, communities and local businesses.”
Half Hollow Hills held their first robotics invitational competition in 2011, and have watched participation grow in each subsequent year. They welcome anyone to attend and learn more about robotics while enjoying the show. The Long Island regional rounds of the FIRST Robotics Competition are held by the School-Business Partnerships of Long Island, and the next season kicks-off on January 6, 2018, at Stony Brook University.
The Half Hollow Hills Robotics Team 3624 is constantly making strides to improve their program and encourage new students with an interest in STEM to join them. Nikita Inderjit, another member of the Thundercolts robotics team, added, “Our team has added a new leadership structure this year with roles to not only focus on building the robot, but also to include public relations, creative arts, outreach and competition.”
FIRST (For Inspiration and Recognition of Science and Technology) was founded in 1989 to inspire young people's interest and participation in science and technology. Based in Manchester, NH, the 501(c)(3) not-for-profit public charity designs accessible, innovative programs that motivate young people to pursue education and career opportunities in science, technology, engineering, and math, while building self-confidence, knowledge, and life skills.
ABOUT HALF HOLLOW HILLS
An education-oriented community with high academic expectations, the Half Hollow Hills Central School District is located in a residential area of 50,000 people in the central part of Long Island, approximately 40 miles from New York City. Providing for the education of more than 8,000 students, the school district has five elementary schools, two middle schools and two high schools. Half Hollow Hills High Schools are fully accredited by the New York State Department of Education and the Middle States Association of Colleges and Schools. The District is committed to providing students opportunities to excel in academics, athletics, and the arts.