The event provided the opportunity for newly appointed superintendents and newly elected school board trustees to mingle and share ideas with fellow educators. 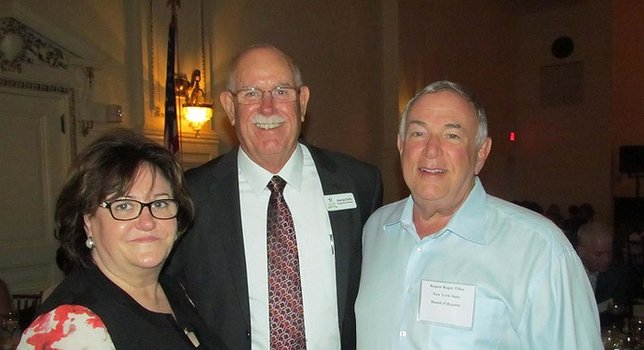 Oakdale, NY - August 17, 2016 - Long Island’s newest public school leaders were welcomed and introduced to the area’s seasoned colleagues during SCOPE’S 32nd Annual Dinner Meeting for Superintendents and School Board Members, held at the St. John University’s Oakdale campus on Aug. 11. The event provided the opportunity for newly appointed superintendents and newly elected school board trustees to mingle and share ideas with fellow educators from school districts across Nassau and Suffolk counties.

During his introduction and welcome, SCOPE Executive Director George L. Duffy urged those in attendance to utilize the many organizations associated with SCOPE and noted that developing the minds of students is an educator’s most important job. “The children we educate today are the leaders of tomorrow,” he said.

Guest speaker New York State Commissioner of Education MaryEllen Elia discussed the changes made and ongoing reviews of the Common Core Learning Standards, state curriculum, student assessments and teacher evaluations. In terms of student assessments, Elia said she believes that “assessments have a role in education and can work as an important tool to educate our children.” She also noted that the state is working to be more transparent by releasing 75 percent of the test questions and providing a parent-friendly assessment report.

In addition, the commissioner addressed teacher evaluations, which she said are now being reviewed by educators. “You want evaluations that can help teachers move forward,” she said.

New York State Regent Roger Tilles presented his views on the demographic and geographic issues resulting in gaps in education and graduation rates. “Districts are asked to overcome issues that are often beyond our schools,” he said. “During my visits to high-need districts, I have noticed that what brings students to school are the programs we often cut from schools, and I hope we can turn that around.”