Troopers will be highly visible, and drivers can expect a number of sobriety checkpoints and additional DWI patrols. 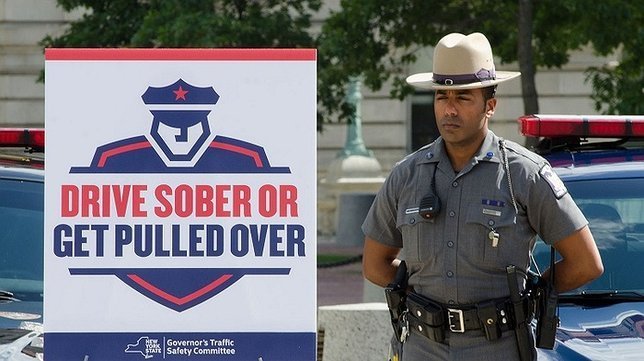 New York, NY - November 20, 2018 - The New York State Police will conduct a Thanksgiving holiday traffic enforcement period from Wednesday, November 21, through Sunday, November 25, 2018, in an effort to prevent tragedies caused by impaired, distracted, aggressive or reckless driving. During this enforcement period, Troopers will be highly visible, and drivers can expect a number of sobriety checkpoints and additional DWI patrols.
Superintendent George P. Beach II said, “During this Thanksgiving holiday weekend I encourage all New Yorkers to drive safely, take your time and designate a sober driver. As we drive throughout the state to see our family and friends this holiday season, we need to focus on safe travel. Our troopers will be out handling the problems that this travel period brings, and their efforts will be focused on enforcing highway safety and preventing tragedies from occurring."
The State Police will supplement regular patrols statewide, including fixed sobriety checkpoints, an underage drinker enforcement and the "Operation Hang Up" initiative, which targets distracted drivers by utilizing Concealed Identity Traffic Enforcement (CITE) patrol vehicles to better locate drivers talking or texting on hand held devices. These unmarked vehicles blend in with every day traffic but are unmistakable as emergency vehicles once the emergency lighting is activated.
The highest traffic volumes of the year typically occur during the Thanksgiving holiday weekend. It is also a time when alcohol consumption is widespread. During the 2017 Thanksgiving holiday period, troopers arrested 242 drivers for DWI, issued 5,797 speeding tickets, 663 tickets for distracted driving, and 234 tickets for the move over law. A total of 15,360 tickets were issued statewide during the period.
This special traffic enforcement detail is funded by the Governor’s Traffic Safety Committee (GTSC).
DMV Executive Deputy Commissioner and Acting Chair of the Governor's Traffic Safety Committee Terri Egan said, "As New Yorkers hit the road to visit family and friends, it’s important to avoid risky driving behaviors that put you and others on the road in danger. I commend the New York State Police and local law enforcement for their efforts in keeping the roadways safe during this busy holiday time.”
The New York State Police and the GTSC recommend these simple tips to prevent drunk driving: