Hundreds of West Middle’s students demonstrated their creativity by crafting decorations exhibiting their appreciation for our veterans. 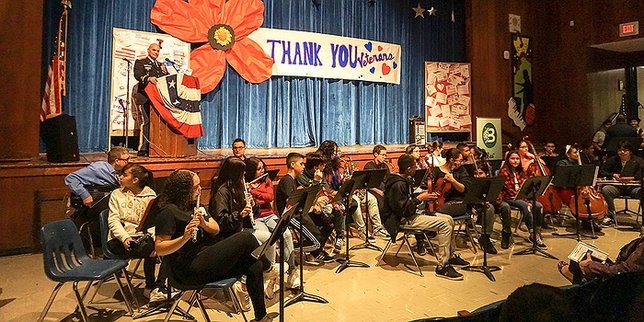 Brentwood, NY - November 14, 2018 - The Brentwood Union Free School District (BUFSD) honored local veterans for their contributions to our nation, and to show appreciation for those who sacrificed their lives in the line of duty. In celebration of the solemn day, Brentwood’s West Middle School welcomed students, faculty, and family members to a light breakfast, student performances and artwork, a special recognition to social studies teacher Lieutenant Colonel Nicholas Scott, and an unveiling of the building’s newly constructed Wall of Heroes.
“Thank you to all of the students and teachers at West Middle who dedicated their time to organize a beautiful ceremony for our local veterans,” said Richard Loeschner, superintendent of Brentwood Union Free School District. “The district is extremely appreciative of the courageous men and women—our students, alumni, and local community members—who have dedicated their lives to defend our nation. On behalf of the district, thank you for your service.”
Hundreds of West Middle’s students demonstrated their creativity by crafting decorations exhibiting their appreciation for our veterans. Members of the Art Honor Society designed a large “Thank You, Veterans” banner that hung across the auditorium stage and created decorative red poppy flower pins that were distributed to each attendee. In classrooms, students created patriotic color posters that hung throughout West Middle’s lobby. The ceremony began with a drill team presentation from the West Middle Brentwood Air Force Junior Reserve Officer Training Corps (AFJROTC) followed by a moment of silence for those who gave our lives for our country. Students in chorus and the band ensemble performed a rendition of God Bless the U.S.A and various other patriotic songs. Following the ceremony, veterans had the opportunity to reunite with other community members who also served in the United States military during the unveiling of West Middle’s Wall of Heroes. The wall displays photographs of relatives and community members in recognition of each individual’s hard work and dedication.
Felicia Thomas-Williams, principal of West Middle School, dedicated a special recognition to recently retired Lieutenant Colonel Nicholas Scott. In addition to his decorated service in the United States Army, Lt. Col Scott has had an immense impact on the West Middle School community as a devoted social studies teacher and building faculty member. On behalf of Brentwood’s West Middle School, Principal Thomas-Williams presented Lt. Col Scott with a plaque for his loyal and dedicated service in the United States Army.
BUFSD continued their generosity to give back to those who have given so much to our nation. Students and faculty members collected new and packaged men’s and women’s clothing in the lobby of each building in a districtwide clothing drive for homeless veterans on Long Island. The family at West Middle School had a great celebration honoring the courageous individuals in our community.
For more information about the Brentwood Union Free School District, please visit the district’s website at http://www.brentwood.k12.ny.us.