Cuomo has announced a plan to fortify Long Beach with bulkheads and subgrade flood barriers to protect the industrial district, which houses many essential services. 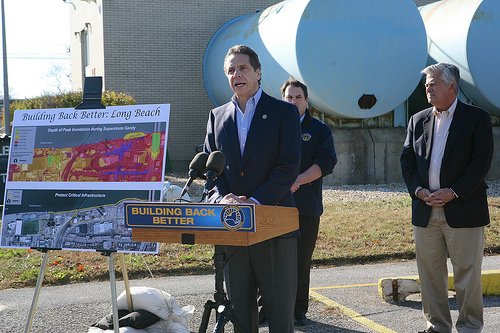 On Sunday, Governor Andrew Cuomo announced another measure to help Long Islanders prepare for the next storm: build a flood barrier around the Long Beach Industrial District.

The $13 million plan would put 6,000 feet of flood barriers around the industrial district, which is located between Park Place and the bay, and provides critical services to residents and businesses of Long Beach. The plan will also add 2,300 feet of bulkheading material to an elevation of 11 feet along the bayside of the district to provide another line of defense after the current bulkheads that are located east and west of the business area.

To further fortify the area against flooding, Cuomo said that the project will provide roughly 4,400 feet of a permanent subgrade flood barrier, or “Dutch Dam,” that can be deployed to a minimum height of 11 feet in the event of a major storm.  This flood barrier would be placed to the north of Park Place to Long Beach Boulevard and West Pine Street to the eastern edge of the wastewater treatment plant in order to surround the eastern and western perimeters of the district to support the bulkheads.

“Superstorm Sandy caused significant damage to Long Beach just over one year ago, but since then we have made substantial progress in making the area more resilient to the effects of major storms, especially through the hard work of the Long Beach NY Rising Committee,” Governor Cuomo said in a press release. “These bulkheads and flood barriers are another example of how New York State is helping local communities build back better and stronger.”

In a statement about this initiative, Nassau County Executive Ed Mangano stated, "I commend Governor Cuomo for this continued efforts in partnering with us to strengthen local infrastructure and protect our residents from future storms. The 6,000 feet of flood barriers for the Long Beach industrial district will help protect essential services and ensure a better, brighter future for our community." This sentiment is sure to resonate with the local community in Long Beach, which still has a long road of recovery ahead.

Governor Cuomo has not yet released a timetable for the project.